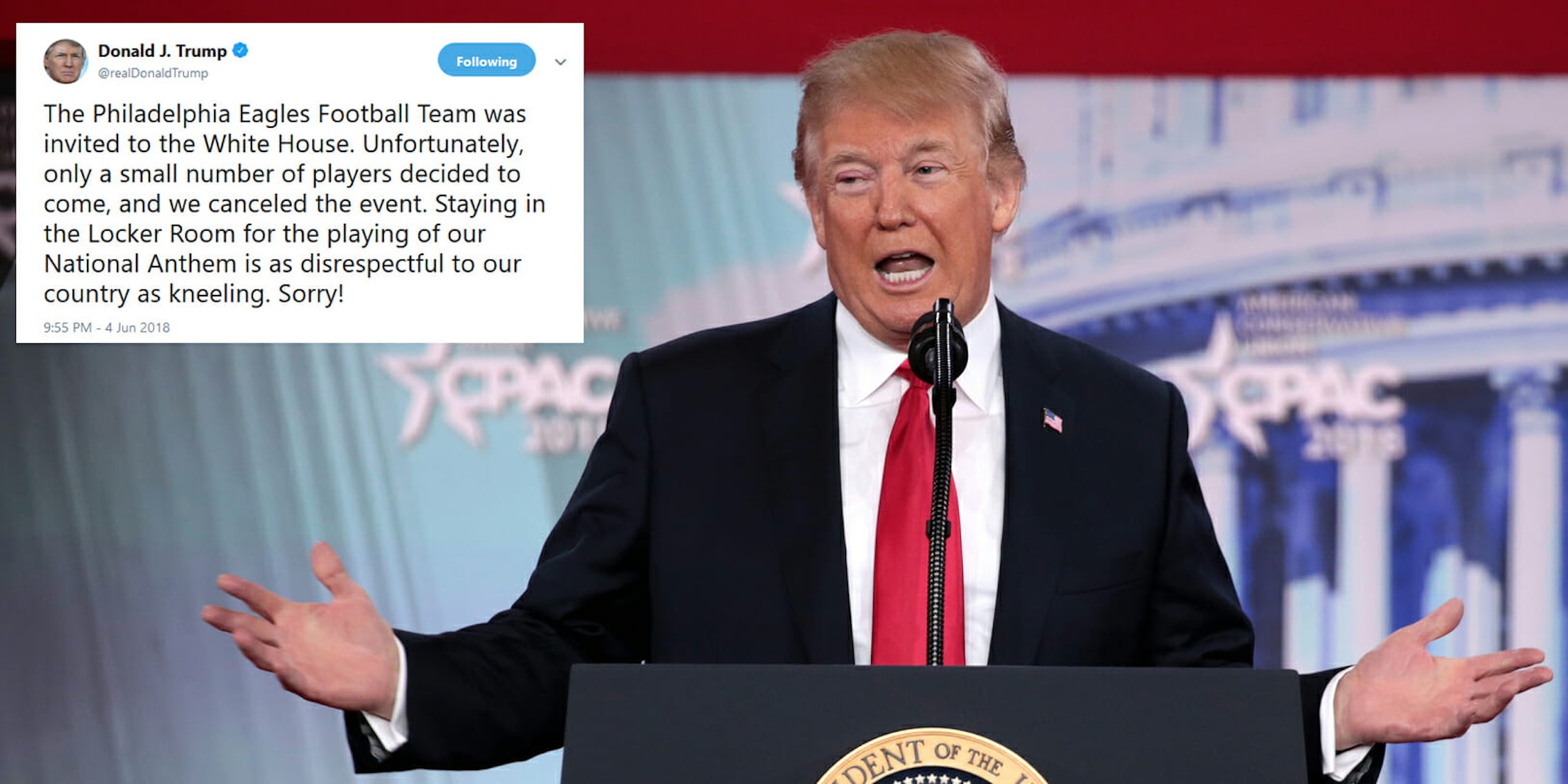 He was ok with the Patriots protesting last year, apparently.

After President Donald Trump uninvited the Philadelphia Eagles, the NFL‘s Super Bowl champions, from a traditional visit to the White House scheduled to occur today, many people online pointed out that the president’s reasoning—some members of the team disagreeing with him on protesting during the National Anthem—was flawed because no players knelt during the anthem during the season.

That’s true, despite what you may be seeing online from some of Trump’s most ardent supporters.

In the wake of Trump’s announcement, where he said he would still hold a ceremony at the White House that will “loudly and proudly” play the national anthem, several of his supporters have pointed to photos of former Eagles player Ron Brooks kneeling during the anthem, as proof the Eagles aren’t deserving of a White House honor.

Google is your friend and really not that hard to do an image search. Eagles cornerback Ron Brooks kneels during the national anthem before a game against the Dolphins on Aug. 24, 2017. (Winslow Townson / AP) pic.twitter.com/RdDUmKJNgp

So what would you call this then? pic.twitter.com/ot85k5wejE

However, it’s worth noting that Brooks only took a knee during the preseason, a part of the NFL’s schedule where games don’t count and players get ready for the regular season.

Brooks was released by the Eagles in August of last year and did not play during the regular season for the eventual Super Bowl champions.

As CNN’s Jake Tapper and others pointed out, no Eagles players took a knee during the regular season or postseason. Some members of the team did protest in other ways.

NFL source notes that not one of the players on the Super Bowl-winning Eagles took a knee all regular and post-season.

Until November, Malcolm Jenkins raised his fist during the anthem to protest racial injustice. In pre-season Ron Brooks took a knee but he was cut.

FACT CHECK: Not a single @Eagles player took a knee or stayed in the locker room during the National Anthem last season, per NFL source. https://t.co/35VlL0zckl

When the president issued a statement, Eagles wide receiver Torrey Smith went right after it.

Last year, the New England Patriots attended a ceremony at the White House. If Trump really cared about players who “disagree with their President because he insists that they proudly stand for the National Anthem” and believes a protest is a reason for uninviting a team to the White House, he should have also blocked the Patriots, the 2017 Super Bowl champions from coming.

Because Patriots players also protested with raised fist during the regular season—just like the Eagles.

With so many Eagles saying they would not attend the ceremony, you have to question whether this was about the president feeling snubbed and not taking a strident stance on NFL protests and patriotism.

Especially since the last national anthem to be played at an NFL game came in February, and Trump made this decision yesterday.