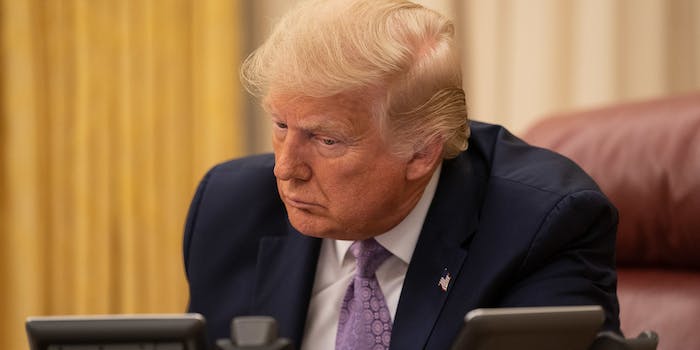 The extraordinary move is being criticized as political weaponization of the Justice Department.

Former President Donald Trump’s Justice Department reportedly secretly seized the phone records of Democratic members of Congress, their aides, and family members in an effort to hunt for leaks from stories about Trump’s associates’ ties to Russia.

The explosive story, first reported by the New York Times, details an extraordinary effort by the Trump administration to use the investigative power of the Justice Department to carry out the then-president’s bidding as it sought the sources of politically damaging stories.

The two members of Congress are Rep. Adam Schiff (D-Calif.) and Rep. Eric Swalwell (D-Calif.), both of whom were members of the House Intelligence Committee. At least a dozen people’s records were subpoenaed. No charges seem to have resulted.

Investigators reportedly debated closing the case based on lack of evidence and other factors, but following the ouster of Attorney General Jeff Sessions, his successor, William Barr, revived it, the Times reports.

In pursuing the source of leaks, which began shortly after Trump’s inauguration, the Justice Department further issued a gag order to Apple, prohibiting it from revealing to the targets that their records were being turned over. Last month, after that order expired, Apple informed them.

The Times also reports that prosecutors eventually secured subpoenas for reporters’ records to try to identify their confidential sources, a move the department only allows when all other investigative avenues have been exhausted.

In recent weeks, the Justice Department disclosed the subpoenas to the news organizations: the Times, the Washington Post, and CNN.

The investigation was further impeded by the declassification of some of the information in the reporting, as it made it more difficult for prosecutors to claim that the United States had been harmed by the leaks. Trump’s attacks on Schiff and former FBI director James Comey, who was also a focus of a leak investigation, also opened up the possibility that defense attorneys would argue that any charges were an effort to use law enforcement to target Trump’s enemies, the Times reports.

Even as some in his department recommended ending the investigations, Barr insisted they continue, leading some to begin to view them as politically motivated.

These revelations have sparked outrage from those whose records were subpoenaed, members of the media, and other observers. Many believe that the investigations were an abuse of power.

“The politicization of the department and the attacks on the rule of law are among the most dangerous assaults on our democracy carried out by the former president,” Schiff told the Times in a statement.

One outlet called for Barr to be disbarred, seeming in reaction to resurfaced video of Barr telling a Senate panel following the release of the Mueller report that “I don’t know” if Trump pressured his department into investigating political enemies.

On Twitter, Schiff accused Trump using the Justice Department to conduct a “baseless investigation” in “yet another example of Trump’s corrupt weaponization of justice.”

Swalwell likened Trump to “the world’s despicable dictators” and accused him of showing “an utter disdain for our democracy and the rule of law.”

He and Schiff have called for an independent inspector general to investigate this and what they characterize as other potential weaponizations of law enforcement by Trump.