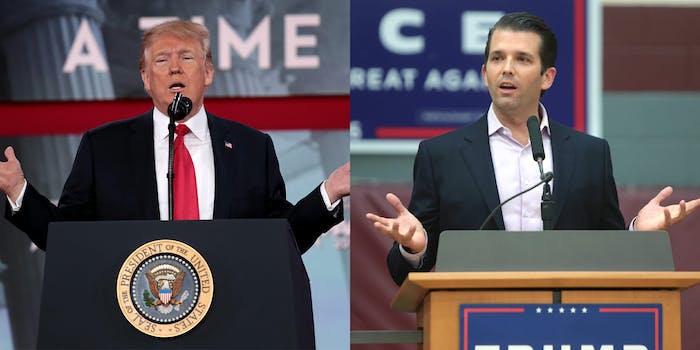 Trump denies that he knew about son’s Russia meeting

It’s probable he was aware of it.

While the president has denied any knowledge of it, saying he only learned of about it a year later, Cohen said that was patently false, CNN reported.

Michael Cohen, President Donald Trump’s former personal attorney, claims that then-candidate Trump knew in advance about the June 2016 meeting in Trump Tower in which Russians were expected to offer his campaign dirt on Hillary Clinton, sources with knowledge tell CNN. Cohen is willing to make that assertion to special counsel Robert Mueller, the sources said.

That story would seem to be a very big piece of evidence in the case against Trump possibly conspiring with a foreign power, but fret not, the president denied it on Twitter this morning.

Trump didn’t offer any defense of his son in his tweets, where he accused Cohen of lying.

Arrived back in Washington last night from a very emotional reopening of a major U.S. Steel plant in Granite City, Illinois, only to be greeted with the ridiculous news that the highly conflicted Robert Mueller and his gang of 13 Angry Democrats obviously cannot find Collusion…

….,the only Collusion with Russia was with the Democrats, so now they are looking at my Tweets (along with 53 million other people) – the rigged Witch Hunt continues! How stupid and unfair to our Country….And so the Fake News doesn’t waste my time with dumb questions, NO,….

…..I did NOT know of the meeting with my son, Don jr. Sounds to me like someone is trying to make up stories in order to get himself out of an unrelated jam (Taxi cabs maybe?). He even retained Bill and Crooked Hillary’s lawyer. Gee, I wonder if they helped him make the choice!

Trump has defended his son about the Trump Tower meeting on Twitter before.

My son Donald openly gave his e-mails to the media & authorities whereas Crooked Hillary Clinton deleted (& acid washed) her 33,000 e-mails!

My son Donald did a good job last night. He was open, transparent and innocent. This is the greatest Witch Hunt in political history. Sad!

Trump Jr., who is very vocal on Twitter about the pretty much every news story, has not tweeted in response.