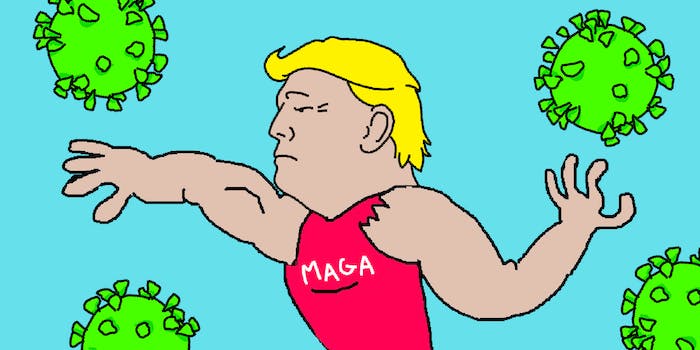 Does the president have ‘Chad optics’ on coronavirus?

The right rallies around its favorite alpha dog.

On Friday morning, President Donald Trump became one of the over 7 million Americans diagnosed with COVID-19, part of a pandemic that has ravaged the nation.

Of those 7 million, just over 400,000 of those cases have required hospitalization—and that’s around 5% of all people diagnosed.

By that basic metric, Trump came down with a case more severe than what almost every other person who contracted COVID-19 had. And thanks to what is the best medical care a human has ever received, he is currently, by White House reports, doing fairly well.

Is that CHAD as hell? According to InfoWars’ Paul Joseph Watson, no one can deny that the president getting sick, needing to be hospitalized, and coming out the other side was a masculine look.

“No one can deny the chad optics of Trump getting COVID and defeating it within 72 hours,” he tweeted.

Chad refers to the Virgin vs. Chad meme, which contrasts a desultory, brooding, effeminate man with a masculine, hulking behemoth.

In this case, it appears, only Virgins die of coronavirus, whereas Chads defeat it. Although images from the week, many noted in response to Watson, weren’t exactly Chad material given Trump’s weakened appearance.

But if it’s optics you are talking about, apparently everyone will be working around the president in hazmat suits this week, which may not be the look the president wants.

“Chief of Staff Mark Meadows says President Trump wants to resume working from the Oval Office and they now have precautions in place to allow for that. Any staff coming in contact with him will wear gowns, gloves, mask, eye protection,” tweeted CBS’s Ben Tracy.

That’s pretty Virgin is you ask me.