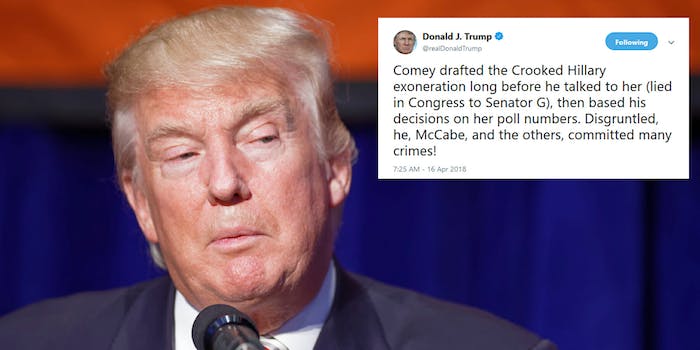 Trump continues to call for Comey to be jailed

President Donald Trump blasted former FBI Director James Comey on Monday morning, saying that he “committed many crimes” the day after the former FBI director sat down for a wide-ranging interview on ABC.

Trump said Comey “drafted” an “exoneration” of Hillary Clinton regarding the FBI’s investigation into her private email server and accused the former FBI director–and another frequent target of his Andrew McCabe–of committing “many crimes” just hours after Comey’s interview with ABC aired on Sunday night.

“Comey drafted the Crooked Hillary exoneration long before he talked to her (lied in Congress to Senator G), then based his decisions on her poll numbers. Disgruntled, he, McCabe, and the others, committed many crimes!” Trump wrote.

The president did not elaborate on which crimes he thinks Comey and McCabe committed, but on Sunday he did list several things he says Comey did that he believed warranted jail time.

Trump’s tweet follows the tactics of Republicans, who launched a “LyingComey” website ahead of his interview that aims to discredit him. On Sunday, the president called Comey “slippery” and said he would “go down as the WORST FBI director in history, by far!”

During the interview Comey said in investigations such as the one into Clinton’s emails, there is typically a “general sense of where it’s likely to end up.”