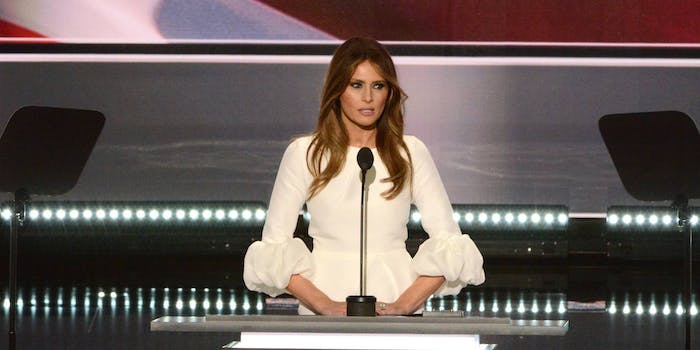 A staffer takes the blame even after the campaign dismissed the charge as 'crazy.'

Plagiarism is a serious, often career-ending charge. But the Donald Trump campaign has devised a variety of (often conflicting) explanations to justify cribbing multiple passages from a 2008 Michelle Obama speech.

Top Trump aide Paul Manafort, meanwhile, accused the media of manufacturing the scandal. It was “crazy,” he asserted, to think Melania Trump, a Slovenian-born former model, would directly quote Obama in a speech heard by “35 million” people. Manafort subsequently pinned the blame on Hillary Clinton, who he claimed is threatened by strong women.

On Wednesday, however, the Trump campaign reversed course entirely and offered a new justification—a stark contradiction to Manafort’s prior objection: Melania Trump is a big fan of the First Lady and knowingly quoted her directly to a Trump speechwriter, who simply forgot to attune the phrasing into something more original.

This excuse is unlikely to play well among Republican voters who generally loathe everything about the First Family. The argument that “imitation is the sincerest form of flattery”—to quote 19th century English writer Charles Caleb Colton, or perhaps one of his unknown peers—holds no water among contemporary political speechwriters, as two who wrote for Mitt Romney and George H.W. Bush told Politico on Tuesday.

Falling on her proverbial sword, Trump staffer Meredith McIver took the blame for plagiarizing Obama on Wednesday in a statement published to the Trump campaign’s website. “In working with Melania on her recent first lady speech, we discussed many people who inspired her and messages she wanted to share with the American people,” wrote McIver, adding how Melania Trump “always liked Michelle Obama.”

McIver further explained: “Over the phone [Mrs. Trump] read me some passages from Mrs. Obama’s speech as examples. I wrote them down and later included some of the phrasing in the draft that ultimately became the final speech. I did not check Mrs. Obama’s speeches. This was my mistake and I feel terrible for the chaos I have caused Melania and the Trumps as well as to Mrs. Obama. No harm was meant.”

According to the New York Times, McIver has worked on “some” of Trump’s books—he’s “authored” 18 so far. Donald Trump rejected her resignation, she said.

There’s no doubt the Republican Party had a lot riding on Melania Trump’s speech. According to a July 17 NBC/WSJ poll, Clinton had a 15-point lead among women (52 to 37 percent). Of course, any speech delivered by a candidate’s wife on the eve of her husband’s nomination is crucial. Traditionally, the candidate’s wife serves to humanize the candidate, at times downplaying some of his less charming personality traits with a bit of playful deprecation.

As Mrs. Obama once said of the president: “I could take up a whole afternoon talking about his failures—he lost his first race for Congress, and now he gets to call himself my husband.”

Instead, Melania Trump’s speech serves only to further expose the disorganized underbelly of the Trump campaign, which has time and time again failed to put forth a concerted response to criticism stemming from its numerous PR calamities. Its message has been so incoherent that some argued it may be intentional—“The national press corps loves a good ‘campaign in disarray’ story,” Slate senior writer Josh Voorhees noted in April.

If there’s one thing to be said about Trump, he really knows how to take a frown and turn it upside-down:

Good news is Melania's speech got more publicity than any in the history of politics especially if you believe that all press is good press!