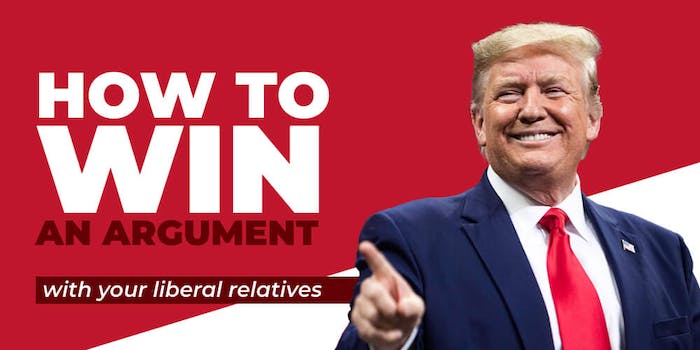 The website helps Trump supporters win arguments when at the dinner table with Trump haters.

What better way to spend the holidays than owning the libs?

The campaign launched a website on Tuesday that helps supporters navigate–and ultimately win–Trump-related conversations when at the dinner table with Trump haters, according to CBS News. The website’s URL is even aptly dubbed SnowflakeVictory.com.

“We’ve all seen the news articles about liberal snowflakes being afraid to see their MAGA relatives at Christmas or holiday gatherings, so the Trump campaign wants people to be ready,” Trump campaign national secretary Kayleigh McEnany said in the statement to CBS News. “As 2019 draws to a close and 2020 approaches, President Trump and Americans are going to be winning, winning, and winning, and then winning some more!”

The website consists of talking points, ranging from “There was no quid pro quo, Democrats always obsessed with impeachment” to “BIG GOVERNMENT SOCIALISM.”

Each section consists of bullet points and a video about the respective talking point. The videos feature various members of the Trump campaign, including Trump’s daughter-in-law Lara Trump, who he rallied to talk about how strong the economy is and the importance of building the wall.

At the bottom of the website, a disclaimer states it was paid for by “by Donald J. Trump for President, Inc.”