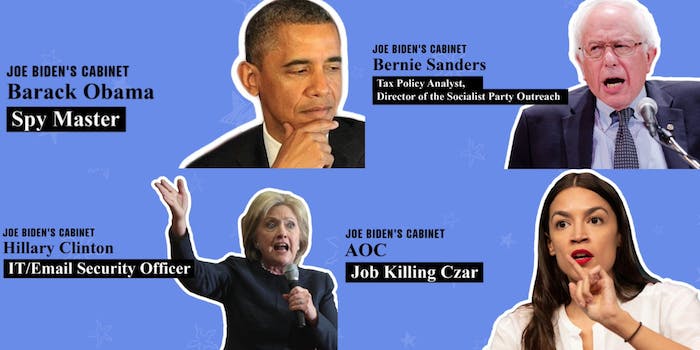 'This is pathetic and beyond childish.'

In a Twitter thread on Friday, the Team Trump account sarcastically alleged that former Vice President Joe Biden’s staffers “leaked who the campaign is vetting for cabinet positions!”

While some may have initially believed the so-called leak to be true, subsequent posts quickly revealed Team Trump’s attempts at satire.

But of the 19 faux cabinet considerations, many are political figures Trump has frequently criticized.

Former President Barack Obama is shown as Biden’s possible “Spy Mater,” a reference to the “Spygate” conspiracy theory. Meanwhile, ex-FBI director James Comey is heralded as the potential leader of the “Federal Bureau of Hoaxes.”

Sanders, according to the Trump campaign, has been tapped as Biden’s potential “Tax Policy Analyst & Director of the Socialist Party Outreach.” Ocasio-Cortez, on the other hand, is simply given the title of “Job Killing Czar.”

The list would not be complete without reference to former Secretary of State Hillary Clinton and her notorious private email server.

Others on the list include everyone from Iranian President Hassan Rouhani and climate activist Greta Thunberg to Sen. Elizabeth Warren (D-Mass.) and billionaire Mike Bloomberg.

The fake list was immediately a hit among Trump supporters and garnered thousands of retweets.

“Hilarious but at the same time it’s so close to the truth it’s scary,” @republicaninNy1 commented.

But many of the responses overwhelmingly condemned the thread, with many agreeing that the list was “pathetic and beyond childish.”

The tweet thread comes as Trump’s disapproval ratings hit an all-time high this week as Americans express growing concern over his handling of the coronavirus pandemic and police brutality protests.

At the moment, Biden leads Trump by 8 percentage points in polls for the upcoming election.