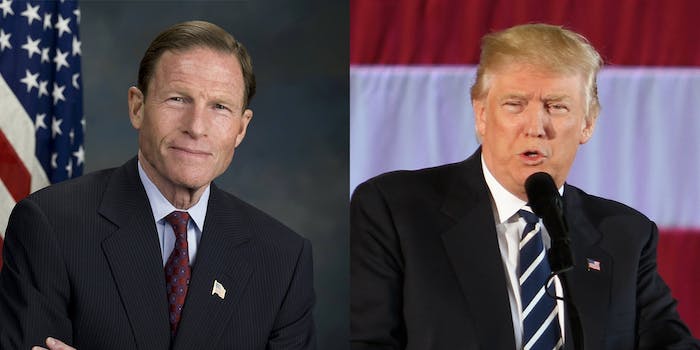 Trump called Sen. Blumenthal a liar while making his own false statements.

President Donald Trump’s attacks on federal judges may be backfiring.

Blumenthal went public with Gorsuch’s private criticism after the meeting in an interview outside his Senate office: “I told [Gorsuch] how abhorrent Donald Trump’s invective and insults are toward the judiciary. And he said to me that he found them ‘disheartening’ and ‘demoralizing’—his words.”

Despite the possibility that Trump’s own nominee expressed criticism of him, however, it is Blumenthal who was publicly berated by the president in a Thursday morning tweet in which Trump defended Gorsuch and called the Democrat senator a liar.

The president accused Blumenthal of having not only lied about fighting in Vietnam but for misrepresenting Gorsuch’s comments.

Sen.Richard Blumenthal, who never fought in Vietnam when he said for years he had (major lie),now misrepresents what Judge Gorsuch told him?

The tweet, however, might end up an embarrassment for the president because Blumenthal is not the only person to have verified Gorsuch’s criticism.

GOP aide Ron Bojean, who is part of the team guiding Gorsuch through the confirmation process and was also in attendance at the meeting, reportedly confirmed via email that Blumenthal’s version of events was correct.

Gorsuch has refrained from public comment during the ordeal, but already some suspect that he was attempting to appear privately empathetic in order to gain Democratic votes for his confirmation hearing.

[tucks kids into bed] And remember, children, Gorsuch only disparaged Trump's tweets in an effort to trick Dems into thinking he's moderate.

Most Democrats are expected to oppose Gorsuch’s nomination outright and plan to filibuster his confirmation.

Blumenthal claims to have since urged Gorsuch to publicly stand by his convictions about Trump, although the nominee declined to do so.

“If he wants the American people to believe that he is truly independent,” the Connecticut senator said, “Judge Gorsuch must tell them in no uncertain terms that President Trump’s attacks are not just disappointing—they are abhorrent and destructive to our Constitutional system—and he must condemn them publicly.”

Hours before the Gorsuch and Blumenthal’s Wednesday meeting, Trump had published an online rant against “so-called judge” James Robart, who, on Friday, issued a temporary restraining order on the president’s executive order imposing a travel ban on some immigrants. The ban had impacted visitors from seven Muslim-majority countries in the Middle East and Africa, caused widespread chaos at airports across the country, and sparked mass demonstrations.

Trump accused Robart of putting the country in “peril” and suggested he would be to blame for any subsequent terror attacks, having legally disrupted the travel ban’s implementation.

A federal court in San Francisco is currently considering whether to keep Robart’s stay against Trump’s travel ban in place.

“He respects the judiciary,” he said. “It’s hard for him and for a lot of people to understand how something so clear in the law can be so misinterpreted.”