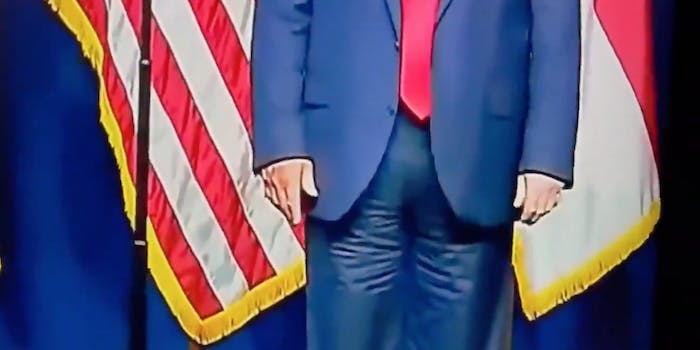 The internet is convinced that former President Donald Trump wore his pants backward on Saturday during a speech in North Carolina.

Just moments after finishing his remarks at the state’s GOP convention, Trump walked out from behind the podium and quickly sparked interest online over what many considered to be strange creases on his pants.

“Others are noting this, but it can’t be shared enough: Donald Trump gave his big speech today with his pants on backward. Look close and tell me I’m wrong,” @BFriedmanDC said.

Aside from the creases, which many argued would not be present on the front of dress pants, users also alleged that Trump’s pants appeared to be missing a zipper as well.

“Seriously, can anyone explain why Trump doesn’t appear to have a have a zipper or fly in his pants?” @OMGno2trump wrote.

Unsurprisingly, the speculation quickly turned to jokes and memes as countless users attempted to explain the seemingly strange occurrence.

“His pants look like they were tailored by four different men in blindfolds who were all given vastly different descriptions of Trump’s body,” @BirthdayWolves said.

Numerous references were also made to the iconic comedy film Space Balls, in which actor and director Mel Brooks momentarily finds himself with his head on backward.

But some claimed that Trump was merely wearing pants with an elastic waist and pointed to other photos in which the same creases could be seen.

“The same pants? What in the hell is this material? Are they elastic waist pull up pants?” @Skye3411 questioned.

In reality, there’s no evidence to indicate that the twice-impeached former president somehow put his pants on backward without noticing. But it wouldn’t be the first time questions were raised about Trump’s attire.