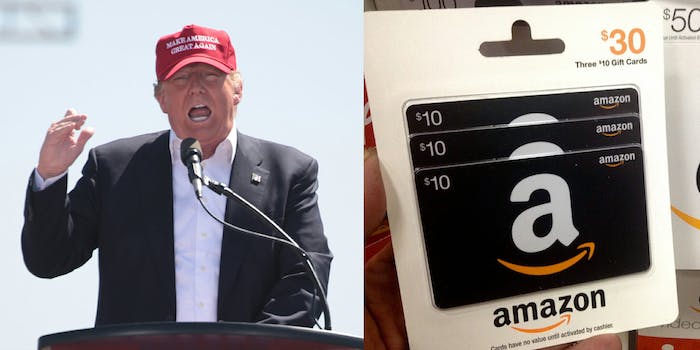 The president continues to attack the online retailer.

The president, who is said to be “obsessed” with the online retail giant, has continued to rail against them on Twitter in recent weeks, picking up a fight he started months ago. The crux of Trump’s argument against Amazon appears to be what he believes is a one-sided deal with the U.S. Postal Service to deliver Amazon packages.

“Only fools, or worse, are saying that our money losing Post Office makes money with Amazon. THEY LOSE A FORTUNE, and this will be changed. Also, our fully tax paying retailers are closing stores all over the country…not a level playing field!” he wrote.

Only fools, or worse, are saying that our money losing Post Office makes money with Amazon. THEY LOSE A FORTUNE, and this will be changed. Also, our fully tax paying retailers are closing stores all over the country…not a level playing field!

But the president reportedly isn’t content with just slinging insults from Twitter. He is “off the hook” and has become “obsessed with Bezos,” Vanity Fair reports.

The desire has become so fraught, according to the report, one source said: “Trump is like, how can I fuck with him?”

While Trump has a long history of attacking Amazon on Twitter, despite appearing to love the retailer when he was promoting his own book several years ago, the departure of White House staffer Gary Cohn has opened the floodgates for Trump to unleash his attacks on the retailer.

According to sources, Trump wants the Post Office to increase Amazon’s shipping costs. When Trump previously discussed the idea inside the White Hose, Gary Cohn had explained that Amazon is a benefit to the Postal Service, which has seen mail volume plummet in the age of e-mail. “Trump doesn’t have Gary Cohn breathing down his neck saying you can’t do the Post Office shit,” a Republican close to the White House said. “He really wants the Post Office deal renegotiated. He thinks Amazon’s getting a huge fucking deal on shipping.”

It’s also worth noting that Bezos owns the Washington Post, a frequent target of the president’s ire over what he thinks is “fake news” coming out about his administration.

You can read all of Vanity Fair‘s report here.