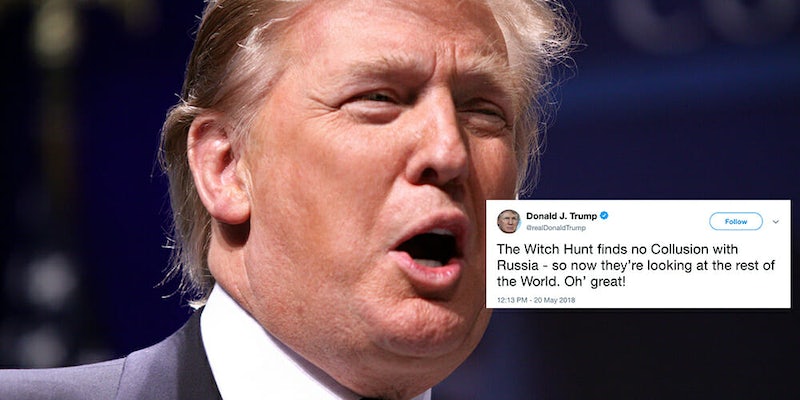 He can't take full credit for the horrendous syntax.

President Donald Trump’s tweets are notorious for rampant spelling and punctuation errors, but it turns out the president can’t take full credit for the horrendous syntax. The Boston Globe reported Tuesday that aides draft tweets rife with inaccurate grammar to “mimic the president’s style.”

Sources “familiar with the process” told the Globe that aides do their best written Trump impressions before presenting him with “three or four sample tweets” to choose from. Employees don’t intentionally misspell words or names, but Trumpian tweet grammar is a free-for-all, which is probably what leads to tweets like this:

The Witch Hunt finds no Collusion with Russia – so now they’re looking at the rest of the World. Oh’ great!

The point of aides writing cringe-worthy sentences, ironically, is to appeal to supporters who seek authenticity. It’s not news that Trump doesn’t craft all his own Tweets, despite his claims that Twitter lets him be “honest and unfiltered,” but the opaque nature of the process makes it difficult to tell which are actually his and which come from employees.

Helpfully, a Twitter bot called @TrumpOrNotBot estimates which tweets are more likely to be Trump’s. The bot is 98 percent sure he typed this one about the “Failing and Crooked” New York Times himself, for example.

Things are really getting ridiculous. The Failing and Crooked (but not as Crooked as Hillary Clinton) @nytimes has done a long & boring story indicating that the World’s most expensive Witch Hunt has found nothing on Russia & me so now they are looking at the rest of the World!

For the record, it’s still unclear who typed “covfefe.”

Meanwhile, it’s interesting that Trump isn’t actually blasting as many error-filled tweets as people might be led to think, even though he’s apparently so attached to his iPhone that it’s “inconvenient” for him to get routine security checks. At the end of the day, it’s just another confounding detail from the sinkhole—I mean White House.