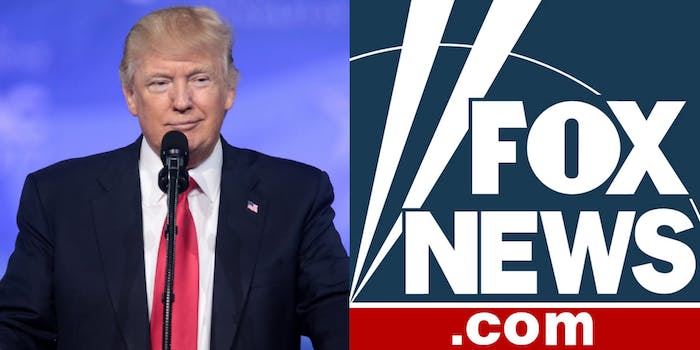 President Donald Trump isn’t shy about his love of Fox News, which he says is the only television network that is not “fake news.” But now, it appears, watching Fox News isn’t just a preference—it’s Trump administration policy.

Employees at the U.S. Food and Drug Administration’s Center for Biologics Evaluation and Research (CBER) said on Friday that the White House ordered the office to turn all televisions to Fox News.

The email appears to have been first tweeted out by freelance science journalist Paul Thacker.

FDA is now all Fox News, all the time. Email sent yesterday to CBER, the biologics section at #FDA pic.twitter.com/9H9BtRGtKV

BuzzFeed reporter Julia Reinstein later confirmed the email and that the TVs had actually been changed to show Fox News.

Here’s the full email sent on Wednesday, May 3:

Please excuse me for sending this out to your entire group via your listserv, but I was alerted by a member in your group and I wanted to let everyone know that the reason for the change from CNN to FOX.

The reason for the change is that a decision from the current administration administrative officials has requested that all monitors, under our control, on the White Oak Campus, display FOX news.

Sorry for the inconvenience, but I am unable to change any of the monitors to any other news source at this time.

The forced watching of Fox News by FDA researchers came just days before the Trump campaign blasted four of the top five major television networks for “censorship” after the broadcasters—CNN, ABC, CBS, and NBC—refused to air an ad praising the president’s first 100 days in office.