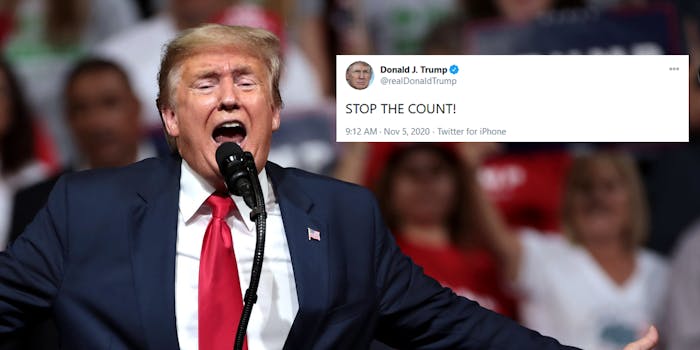 Trump accidentally calls for Biden to be elected president

A lot of people pointed out Trump's desire would mean his defeat.

President Donald Trump called for disenfranchising voters whose ballots have not been counted on Thursday morning—but didn’t seem to realize that doing so would actually help his Democratic challenger.

No winner has been called for the 2020 presidential election yet, as several states continue to count ballots.

Former Vice President Joe Biden is currently leading in two states, Arizona and Nevada, that are critical for his chances to reach the necessary 270 Electoral College votes to win the presidency.

Despite this, Trump tweeted—in all caps—to “STOP THE COUNT” early Thursday morning.

If the count was stopped, Biden would win Nevada and Arizona, netting him the necessary Electoral College votes.

The president’s campaign has been all over the place with its demands, but it essentially boils down to he wants votes to be counted in states he is losing, but wants the count to stop in states he is winning in.

Regardless, the fact that Trump’s all caps declaration—which the Associated Press notes has no bearing on how states will continue counting votes—would give Biden a win was pointed out by numerous people online.

States are continuing to count ballots, with more results expected to be announced today.