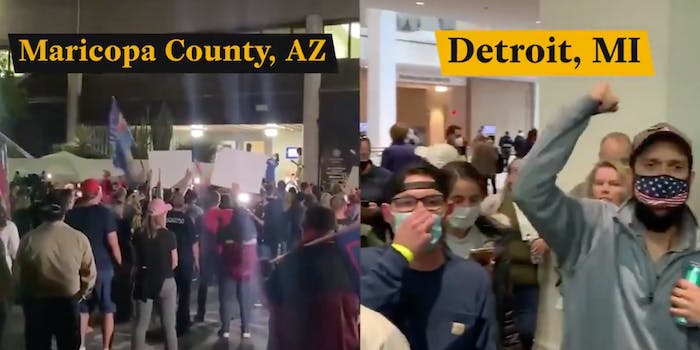 The 2020 presidential election has yet to be decided, but protests are already underway.

President Donald Trump has been vocal about his desire to limit the counting of mail-in ballots, which are a legitimate form of voting that Americans have used for more than a century. Large-scale mail-in voting has been around since the Civil War, but that hasn’t stopped Trump from promoting the idea that it is unsafe and potentially fraudulent.

As the vote count stretches into its third day, however, Trump supporters can’t seem to make up their minds whether to support or condemn late-ballot counting.

Two days after the election, ballots are still being counted in several key battleground states. Many of these were leaning right before mail-in and early ballots began being counted, prompting Trump supporters to push back against further counting. After all, if only the initial ballots—cast in person on Election Day—were counted, their candidate would likely have a clear path to reelection.

This has prompted Trump voters in several areas of the country to gather outside of polling places to demand the cessation of typical, legal election proceedings. Video of a crowd of Trump supporters chanting inside a ballot-tallying station in Detroit has been spreading online. The 53-second clip shows the crowd chanting “Stop the count!” shortly before Michigan was officially called in former Vice President Joe Biden’s favor.

Michigan residents apparently failed to communicate the voter suppression goal to their fellow Trump supporters in Arizona, based on a second video making the rounds online. A clip from Phoenix shows Trump supporters chanting “Count the votes!”

The Phoenix gathering occurred outside the Maricopa County Elections Department, where dozens of mostly unmasked voters congregated. Arizona was, at the time, on a razor-thin margin. The state has since been called in Biden’s favor, despite not all votes being tallied. This is a common occurrence, as the Associated Press often calls states in one party’s favor when too few ballots remain to flip the race.

Trump supporters apparently didn’t get the memo, prompting them to gather outside the polling place. Their clamoring to count every vote in Arizona while fighting to stop their fellow Americans’ votes from counting in Michigan was painfully ironic.

This fact was not lost on social media users, who quickly seized upon the contradictory videos. Jokes about antifa and the lack of police intervention soon littered the internet.

“What is Antifa up to, here?” Twitter user @TRRebooted joked about the Arizona gathering.

Other people noted the stark differences between a Trump protest versus, say, a Black Lives Matter protest.

“And not a whiff of teargas anywhere, no beatings, no arrests,” @AZIndivisble1 tweeted, to which @TheFoxtato replied, “Just look harder, I’m sure the answer is white in front of you.”

In the comment section for the Michigan video, viewers were far more solemn. Discussions about the concept of democracy and the state of the U.S. abounded.

“Are they chanting, ‘Stop the count?'” @TRBEllis asked. “Seems like they WANT a dictatorship.”

Another video tweeted by The Recount makes a supercut of the two opposing chants, displaying the glaring contradiction.

Viewers were quick to meme the final video and its polar opposite viewpoints. Several classic memes, such as the women yelling at a cat and Dora the Explorer asking “Why not both?” were treated to election remixes.

Votes are still being counted in several key states across the country. Biden currently leads the race with 264 electoral votes. Trump has 214. Either candidate needs 270 to win the presidency.