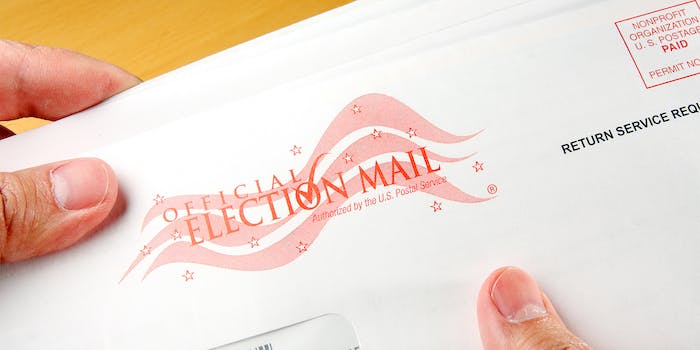 Most states have a way to track your ballot.

In preparation for what is lining up to likely be the largest vote-by-mail election in the country’s history, some voters may want make sure their vote ends up being counted. Luckily, many states have ways to track your ballot online.

The risks associated with the coronavirus pandemic encouraged many people to vote-by-mail in order to avoid crowds at the ballot box.

While President Donald Trump has repeatedly made unsubstantiated claims criticizing the integrity of mail-in ballots, the online ballot tracking many states offer will help voters keep track of their ballots during this less-than-normal election.

Voting-by-mail has been an option for a while, but it is almost certainly going to have more people in the U.S. choosing this option for the upcoming election.

In 2016, only about 21% of voters chose the method, according to Pew Research Center. Given the concerns about voting in-person during a pandemic, it seems likely that number will rise substantially.

State sponsored online ballot tracking makes it easy for voters to keep an eye on how their vote is moving through the system.

If you’re curious how to track your ballot online, here’s a look at what is happening in your state.

What states allow voting by mail?

In all states, citizens can vote by mail. But, each state has its own voting rules, which makes it easier to do so in some states than others.

Every state allows for absentee voting. It is for people who will not be in their registered state during the election. Absentee votes also go by mail, and it is how Trump votes in Florida from Washington D.C., according to NPR.

Typically, mail-in voting requires an approved excuse like being out of the state, certain illnesses, injury, or age. But, because of the pandemic, many states have made accommodations for mail-in voting.

Thirty four states say COVID-19 is an excuse for voting by mail, according to the New York Times. Meanwhile, nine states and Washington D.C. sent out mail-in ballots to every registered voter.

Other states have been in the process of expanding their excuses for voters to get mail-in ballots because of the pandemic. For example, a federal judge ruled in September that Louisiana must allow voters to request absentee ballots if they meet certain COVID requirements, according to the Daily Advertiser.

What states have online ballot tracking?

Almost each state has a online ballot tracking system. But not every state does.

There are four states without universal online tracking services, including: Illinois, Mississippi, Missouri, and Wyoming. The four states require voters to check with their local officials.

But, most states that have ramped up mail-in voting capabilities have also invested in personalized online ballot tracking systems.

Here’s how to track your ballot online in the following states:

Illinois does not have a universal tracking system. Instead, local election officials may or may not have their own depending on district. The same goes for Wyoming.

Meanwhile, a spokesperson from the Secretary of State in Mississippi said voters should ask their local clerk to check on their ballot.

Similarly in Missouri, voters should contact their local voting officials to confirm a received ballot. However, voters in St. Louis do have an online voting system.

How do you track ballots online?

Each universal ballot tracking site varies by state. But in order to find a specific ballot, a voter must input some identifying information in order to locate it.

Another tactic Trump has used to undermine the election is telling his base to vote twice—once by mail and once at the ballot. It’s an action punishable by fine and even jail time in some states.

In order to ensure that this does not happen to you, tracking your ballot online ensures your vote counts.