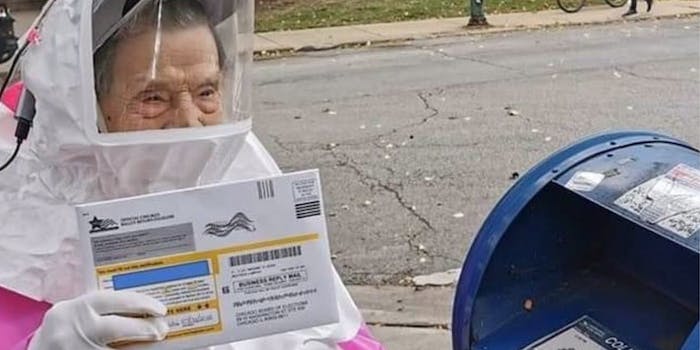 A viral photo shows Beatrice Lumpkin, a 102-year-old former teacher in Chicago, wearing a hazmat suit while dropping her ballot in a mailbox.

Older people are at a higher risk of severe illness from the coronavirus, according to the Centers for Disease Control and Prevention, and have been advised to stay home except for essential activities since the start of the pandemic. For Beatrice Lumpkin, voting is essential.

The Chicago Teachers Union shared a photo of Lumpkin smiling through the hood of her personal protective equipment, which minimizes exposure to germs. Her gloved hand held up her ballot by a mailbox near her apartment building.

Lumpkin told WBBM on Thursday that she hasn’t missed a ballot since her first time voting for President Franklin Delano Roosevelt in 1940.

“When I was born, women couldn’t vote,” Lumpkin told the station.

She believes that 2020’s presidential election is “the most important election of my lifetime. The very future of democracy is on the line.”

Of President Donald Trump, who has cast doubt on mail-in voting, Lumpkin told the station, “Well, if I had the chance, there would be a whole lot I could say to President Trump.”

The former match teacher said much of the criticism of mail-in voting has been overblown. Lumpkin understands the mail-in process and is confident in the security: “As soon as they get my ballot, I’m going to get an email that’ll let me know they have the ballot.”

Twitter user @photocallaghan wrote: “Thank you Bea! You are an example to us all. I’d also point out this sweet lady was born in the midst of our last pandemic – we should all take her caution seriously! God bless you, Ms. Lumpkin.”