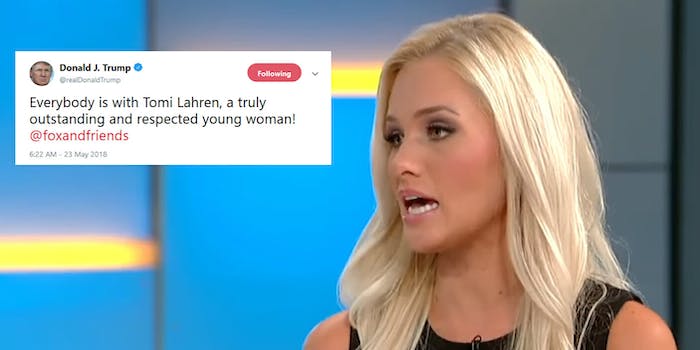 Trump called her 'outstanding' and 'respected.'

President Donald Trump took to Twitter to offer a resounding endorsement of Fox News pundit Tomi Lahren on Wednesday morning after someone threw a drink at her at a bar over the weekend.

Lahren, the 25-year-old pundit known for her staunch conservative takes, had the drink thrown at her while having brunch with her parents in Minneapolis.

Videos from the incident show Lahren getting into a heated exchange with a patron of the restaurant.

On Wednesday morning she discussed the incident on Fox & Friends—presumably prompting Trump’s response on Twitter, as the president is known to tweet after watching the talk show program.

“We were just enjoying brunch after I did a show the night before and unfortunately there was a group of people probably around my age that thought it would be funny to throw water at me and then start chanting profanity,” she told the Fox & Friends hosts, adding: “This was something that was embarrassing for me, and embarrassing for my family… But I’m tough, my family is tough, we can handle it.”

The segment seemed to touch a nerve with the president, who decided to offer his support for her to his Twitter following.

“Everybody is with Tomi Lahren, a truly outstanding and respected young woman! @foxandfriends,” the president wrote.

Lahren responded by quote retweeting the president and adding an American flag emoji.