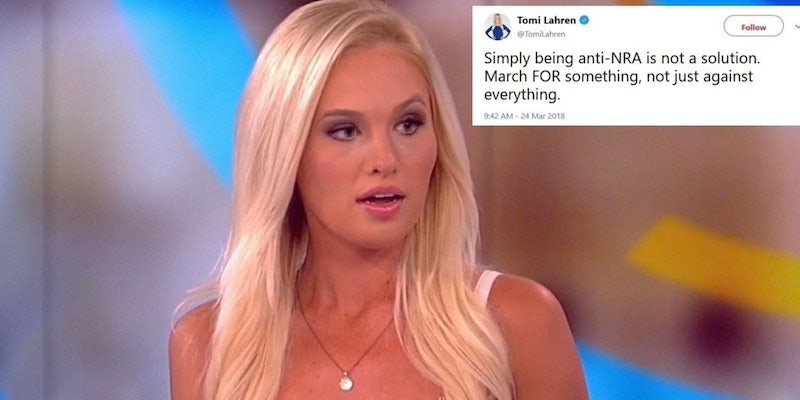 The answer was in the title of the march.

When Tomi Lahren wondered in February why people couldn’t keep the politics out of the Parkland shooting, the conservative commentator was relentlessly mocked on Twitter. On Saturday, Lahren again waded into the gun control debate, criticizing those who participated in the massive March For Our Lives protests.

While hundreds of thousands of people took to the streets on Saturday, Lahren tweeted this, wondering why the protesters weren’t standing for something.

Simply being anti-NRA is not a solution. March FOR something, not just against everything.

it's literally called March FOR OUR LIVES you absolute walnut https://t.co/3S0ff4fFTH

claiming they're not marching FOR something when the name is March FOR Our Lives….. pic.twitter.com/CnGM14kNeG

We’re marching to celebrate the end of the GOP.

Those Kids Marched For Their Lives, and did so intellectually, intelligently and emotionally. It was in no way just anti-NRA, it was anti don't take away my life, liberty and the pursuit of happiness

According to organizers, the crowd size for the Washington march was estimated at 800,000 people, larger than Donald Trump’s inauguration crowd. Nearly 200,000 people reportedly showed up in New York. And hundreds of thousands of more marched in solidarity throughout the country.

Presumably, all of them could quickly explain to Lahren the point of their protests.