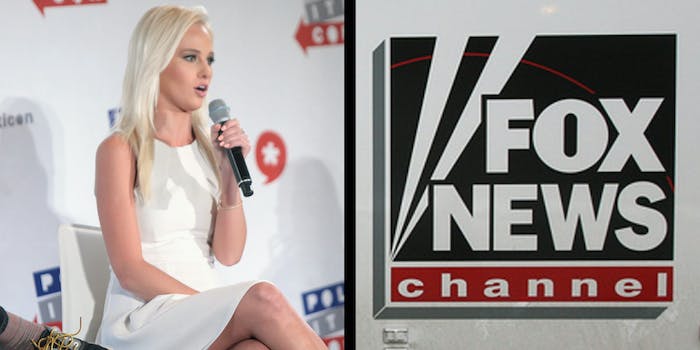 Tomi Lahren is heading to Fox News to save America

Tomi Lahren, the popular and divisive online conservative commentator, has been hired to make appearances on Fox News.

Lahren, 25, previously hosted shows on the Blaze and One America News Network and works for a political action committee supporting President Donald Trump. She will begin work on a “signature role” on a digital product at Fox News, according to the Associated Press.

She will make her debut on right-wing pundit Sean Hannity’s show on Wednesday, AP reported.

“I am blessed and honored to join the Fox News team,” she wrote on Facebook. “This exciting new step will allow me to give voice to all the America-loving patriots who have had my back since day one.”

Lahren said Fox News’ “digital future” was “bright” adding that she would have more news to share in the future.

I am blessed and honored to join the Fox News team. This exciting new step will allow me to give voice to all the…

The conservative provocateur shot up in popularity following her appearances on the Blaze, Glenn Beck’s network. She was fired after making comments about abortion rights on The View where she said it would be wrong for her to tell women what to do with their bodies.

In response, Lahren filed a wrongful termination lawsuit against the Blaze and Beck. The case was settled.

Lahren, who has more than 4 million followers on Facebook, works for the Great America Alliance which raised more than $28 million for Trump’s campaign for president in 2016.