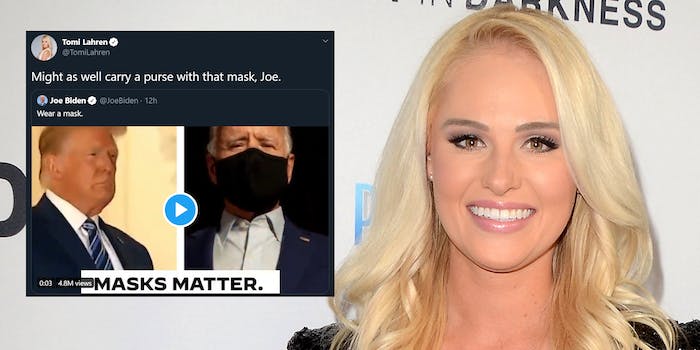 Late last night, President Donald Trump left Walter Reed and returned home to the White House after his brief hospitalization for COVID-19. Republicans were very supportive of the party leader on Twitter, hailing him as strong.

However, one person not dying from COVID does nothing to stop the pandemic from raging. Yet in the eyes of many Republicans online, it appears to have ended the pandemic.

Case in point, conservative pundit Tomi Lahren, who ridiculed Joe Biden for wearing a mask after Trump was released from the hospital, quote-tweeted a video from Biden showing him putting on his mask as Trump took his off.

“Might as well carry a purse with that mask, Joe,” Lahren wrote, implying that Biden’s mask-wearing was effeminate compared to Trump’s handling of his own illness.

Mask-wearing helps prevent the spread of it more so than keeping you from contracting it, so Biden’s decision likely isn’t that he’s scared of getting it but that he doesn’t want others to, and if Trumpworld had the same mindset, the president probably wouldn’t have had to even deal with going to the hospital for the virus.

Coronavirus has spread throughout the Trump White House this week, while the Biden campaign, which is pushing masks, appears to have dodged a bullet at the debate.