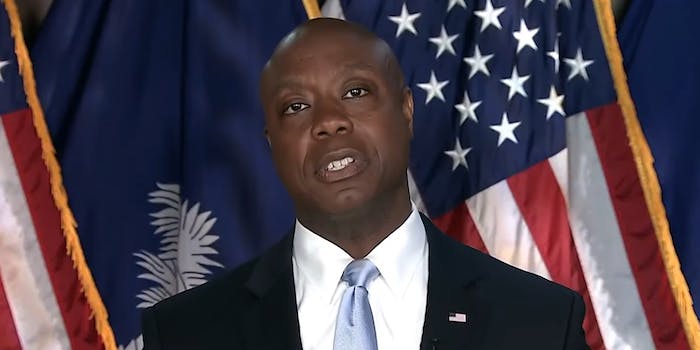 The South Carolina politician, who is the only Black senator in the Republican Party, said Biden has not lived up to his promise of governing all Americans equally and working to ease the tension and division among Democrats and Republicans. “Three months in, the actions of the president and his party are pulling us further and further apart,” Scott said. (You can read the full transcript here.)

Scott also said that Americans “desperately” need to reach some “common ground” in their “discussions of race,” reflecting on his own experiences for emphasis. “I have experienced the pain of discrimination,” he said. “I know what it feels like to be pulled over for no reason. To be followed around a store while I’m shopping.”

Scott added that “progressives” and “liberals” have called him “Uncle Tom” and the N-word.

Despite these blatant demonstrations of racism, however, Scott seemed unwilling to go as far as Biden, who said point-blank in his address that “white supremacy is terrorism.” Instead, Scott argued that “kids again are being taught that the color of their skin defines them, and if they look a certain way, they’re an oppressor.”

“Hear me clearly: America is not a racist country,” Scott continued. “It’s backwards to fight discrimination with different types of discrimination. And it’s wrong to try to use our painful past to dishonestly shut down debates in the present.”

Twitter users widely lambasted Scott’s claim that America is not racist and pointed out what they considered to be his bald-faced hypocrisy.

“’America is not a racist country,’ says Tim Scott, a US senator who once revealed he was stopped by police seven times in one year,” reporter Helen Kennedy tweeted.

“I can’t imagine the cognitive dissonance required to be a Black man and say ‘I get called the N-word… America is not a racist country,’” activist and artist Bree Newsome added. “Being a Black person who’s willing to be a public advocate for white supremacy is a job that always pays so the position is always filled.”