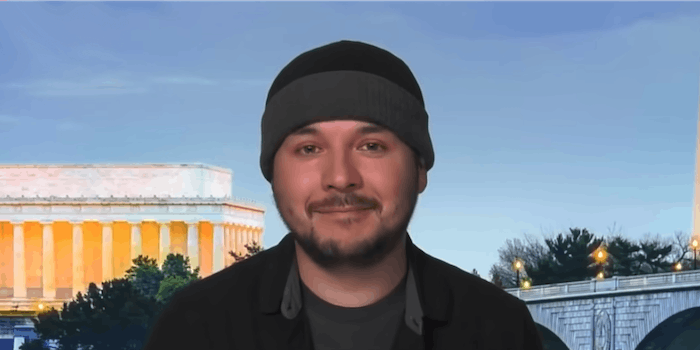 'Something bad just went down...'

The truck, which crashed in the early morning while traveling on Interstate 79 near Morgantown, was transporting vials of the Moderna vaccine that were intended to be sent overseas.

The driver of the truck reportedly lost control before hitting a concrete barrier and sliding down a 30-foot embankment, according to WV Metro News. The driver, who was stuck inside the vehicle for some time, was eventually transported to a nearby hospital with minor injuries.

“Something bad just went down near Morgantown, WV,” Pool tweeted despite the wreck taking place three days prior. “A Moderna shipment truck crashed, hazmat dispatched, airspace shut down and now apparently Emergency Response is claiming the Department of Defense took it over.”

Pool’s fanbase immediately began arguing that something nefarious had occurred, pointing specifically to the deployment of a Hazmat unit.

“Why the fuck are they using hazmat suits?” one user asked in a widely liked response. “I-it’s not like these vaccines are DANGEROUS or anything… right? Eh, best not to think about it; time to go get my 9th booster shot!”

Countless others made similar remarks as well, using the wreck to validate anti-vaccine beliefs.

“Yup perfectly safe that stuff is….. If they do this when it spills…Hmm…Makes me wonder why people don’t consider this when they get themselves and their children injected with it…” another user said.

In reality, the hazmat team had responded due to fluids that had leaked from the truck. In a statement on Facebook, the Monongalia County Sheriff’s Office said on Friday that the hazmat was dispatched in order to secure “approximately 50 gallons of oil and anti-freeze” that had begun leaking to a nearby stream.

Despite the uproar, the U.S. Department of Health and Human Services (HHS) later confirmed to Pool’s website that none of the vaccine vials had ever spilled from the truck.

“A truck carrying 1.2 million doses of Moderna vaccine destined for Ghana had an accident on the way to Dulles airport,” the HHS spokesperson said. “We understand the driver was taken to hospital but has since been discharged. COVAX and its partner agencies wish the driver a full and speedy recovery and are working closely with the US Government to ensure disruptions to shipments of life-saving vaccines are as minimal as possible.”

And despite claims that the presence of the Department of Defense (DOD) indicated some sort of grand conspiracy, the truth is much simpler: The shipment was being run by HHS, FEMA, as well as DOD, as part of the Countermeasures Acceleration Group, formerly known as Operation Warp Speed.

As of late Monday afternoon, Pool has not informed his Twitter followers of the fact that no vaccines were actually spilled.