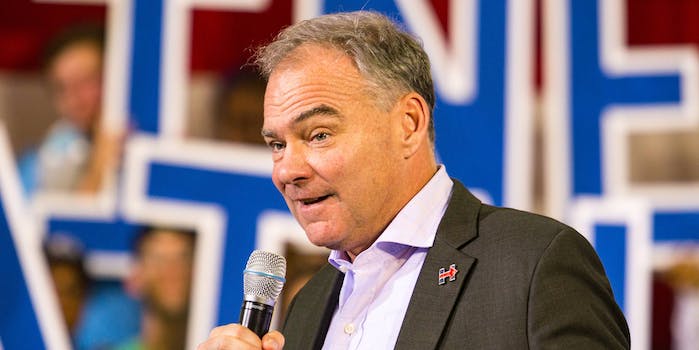 Tim Kaine talked about email controversy, the Russia reset, and whether or not she's held a press conference in the last 274 days.

And yet, even the man some Democratic voters once considered too boring to be vice president (he’s even admitted it himself) has to get out there and spread the word sometimes.

That’s what Kaine did on Sunday morning, appearing on ABC’s This Week with George Stephanopoulos. Although, title aside, he wasn’t actually with Stephanopoulos. It was ABC News’ Martha Raddatz who asked the questions.

Raddatz started things off by asking Kaine about the FBI notes, saying that Clinton seemed unaware of the meaning of some labels used to mark classified information, instead relying on her staff to keep her apprised, and that some emails were deleted despite already having been requested by a congressional committee. Raddatz’s first question to Kaine was straightforward, although it wasn’t really about the facts of the case so much as Clinton’s reaction: “Don’t the American people deserve a better explanation?”

Kaine, to the contrary, insisted that the American people had already received “a better explanation.” He explained:

“Well, and I think Martha, they’ve gotten a better explanation. Because to add to what she just said, the reason these materials are being made public is that Hillary Clinton said ‘I want the public to see them.’ When Congress asked the FBI give us your notes, Hillary said, ‘yeah, that’s great, give them your notes, but let the American public see it’. And what these notes demonstrate is in very significant detail, why the FBI chose not to go forward with any additional proceeding. She did make a mistake, and she made it by deciding she wanted to use one device rather than multiple devices. She’s apologized for that, she said it was a mistake, and she’s learned from it.”

Raddatz pressed Kaine on the matter, however, citing Clinton’s poor poll numbers relating to voter trust, and asking if she needs to better explain herself in the face of them. Kaine flatly disagreed with the notion, however, saying he’d “sat with her while she has answered questions” on the email controversy, and pivoted to attacking GOP nominee Donald Trump for failing to release his tax returns?to Kaine, a worse breach of transparency and trust than anything Clinton’s done.

Kaine had to expect he was in for a tough interview, especially considering the tact the GOP is taking on the release of the notes.

Despite the fact that FBI director James Comey (himself a Republican) declined to indict Clinton, saying that “no charges were appropriate” despite chastising her for “careless” behavior, Pence has gone so far as to call her “the most dishonest candidate for president since the Nixon administration.”

Not to be outdone,Kaine pulled out his own reference of America’s infamously disgraced 37th president. He argued that Trump’s call for Russia to hack Clinton’s emails was itself a Nixonian move, equating it to the break-in of the Democratic National Committee offices at the Watergate complex back in 1972:

“… on the other hand, we’ve got a candidate in Donald Trump who won’t release his tax returns to the public after he promised to do so. And talk about national security. He has openly encouraged Russia to engage in cyber hacking to try to find more e-mails or materials, and we know that this cyber attack on the DNC was likely done by Russia. A president was impeached and had to resign over an attack on the DNC, during a presidential election in 1972. This is serious business. So, contrast the Hillary situation, where the FBI said there’s no need for legal proceedings, with an attack that is being encouraged by Donald Trump on the DNC by Russia, similar to what led to resignation of a president 30 years ago.”

Raddatz also challenged Kaine on Clinton’s role in the Obama administration’s so-called “Russia reset,” a strategy that has come under harsher scrutiny in recent years, both thanks to Russian aggression in Ukraine, and the coziness between the Trump campaign and Russian president Vladmir Putin, which has become a point of attack for the Clinton camp. Raddatz challenged Kaine to give a defense of the reset, in light of recent geopolitical events. Kaine didn’t really try to defend the policy, however, so much as cast the blame on the “dictator” Putin.

“To try to say that’s the U.S.’s fault is ridiculous. [Putin] is a dictator, who represses journalists?and there’s another tie, Donald Trump is banning journalists from outlets he doesn’t like from covering him on a campaign,” Kaine said. “He’s taken some lessons from Putin and others. But to say that Putin’s imperial ambitions are the fault of anyone in the United States is ridiculous.”

To close out the interview, Raddatz asked Kaine a question that’s become increasingly stressed in the media: Why hasn’t Clinton held a press conference in 274 days? Her absences from the public eye has fueled discussions of whether she’s afraid of the press, or ducking the kind of unpredictable environment that a full-blown presser entails.

Tim Kaine: Hillary Clinton "will be very, very accessible to the press" between now and Election Day. #ThisWeek https://t.co/GLtsMLrcQ2

Kaine pushed back on that notion, however, pointing out that Clinton actually did hold a press conference last month, just not one that the national media seems to consider as such. On Aug. 5th, Clinton fielded questions from the National Association of Black Journalists and the National Association of Hispanic Journalists, although the questioners were pre-selected.

Raddatz followed up by asking Kaine if the public can expect Clinton to hold a press conference?presumably meaning she didn’t believe the NABJ/NAHJ conference counts?to which Kaine replied that she’d be “very accessible to the press,” and so would he.

There’s an evident frustration on the part of Clinton campaign officials and surrogates that her email controversy and Clinton Foundation accusations are still generating so much attention, and dominating her coverage, especially considering that Trump was implicated this week for the very sort of quid pro quo scandal he’s been accusing Clinton of.