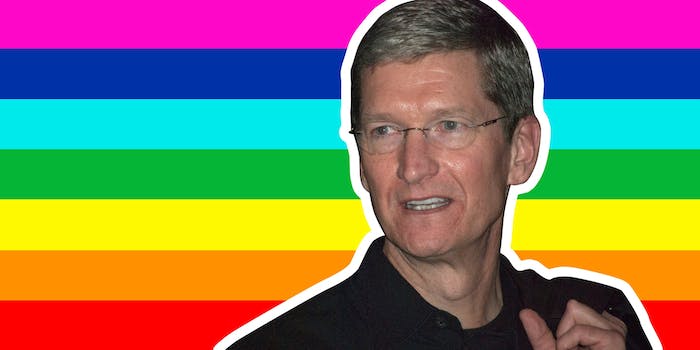 "I don’t consider myself an activist," Cook said, "but I realize how much I’ve benefited from the sacrifice of others."

Apple CEO Tim Cook has publicly discussed his sexuality for the first time in a column in Bloomberg Businessweek, saying he is “proud to be gay.”

Though he has “tried to maintain a basic level of privacy,” he wrote, he has since come to realize that this “desire for personal privacy has been holding me back from doing something more important.”

For Cook, the decision to come out publicly reflects his desire to build a better future: “If hearing the CEO of Apple is gay can help someone struggling to come to terms with who he or she is, or bring comfort to anyone who feels alone, or inspire people to insist on their equality, then it’s worth the trade-off with my own privacy.”

“I’m proud to be gay,” the 53-year old CEO writes, “and I consider being gay among the greatest gifts God has given me.”

Cook wrote that he has never tried to hide his sexual orientation and that many of his colleagues already knew he was gay. “It doesn’t seem to make a difference in the way they treat me,” he wrote.

Even before coming out, Cook was a passionate champion of LGBTQ rights. On Monday, he slammed his home state of Alabama over its reluctance to embrace gender and sexual equality. “[Alabama] is still too slow on quality for the LGBT community,” Cook told Alabama Academy of Honor. “We can’t change the past, but we can learn from it and we can create a different future.”

While this is the first time that Cook has publicly discussed his sexuality, it has long been an open secret in the tech world that the head of the industry’s most scrutinized and revered company was gay. This spring, Out Magazine ranked him No. 13 on its Power 50 list. In June, a CNBC anchor accidentally outed Cook, saying, “I think Tim Cook is fairly open about the fact that he’s gay at the head of Apple, isn’t he?”

Cook finished his essay by recounting how, when he arrives at his office each morning, he is “greeted by framed photos of Dr. King and Robert F. Kennedy. I don’t pretend that writing this puts me in their league. All it does is allow me to look at those pictures and know that I’m doing my part, however small, to help others.”

“We pave the sunlit path toward justice together, brick by brick,” Cook wrote. “This is my brick.”