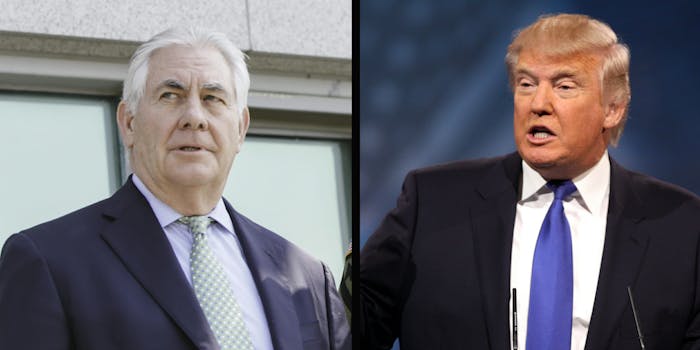 The plan could reportedly happen by the end of the year.

The White House is reportedly planning to force out Secretary of State Rex Tillerson and replace him with CIA Director Mike Pompeo, according to a new report.

The move to replace Tillerson comes as his relationship with Trump reportedly continues to fray—including the secretary of state holding a news conference to reaffirm his commitment to the Trump administration, but did not outright deny that he called the president a “moron.”

Trump and Tillerson have also butted heads on issues such as the Iran nuclear deal and how to respond to aggression from North Korea.

Cotton has been vocal of his stance against strong encryption—including last year when he called WhatsApp‘s decision to use encrypted messaging an “open invitation to terrorists, drug dealers and sexual predators to use WhatsApp’s services to endanger the American people.”

It’s not clear if Trump has signed off on the plan to shuffle the deck in his administration, the Times reports, but Chief of Staff John Kelly is said to have developed the transition plan and has discussed it with other officials.

If the plan comes to fruition, it would happen around the end of the year or early next year, according to the news outlet.

You can read the New York Times report about the plan here.