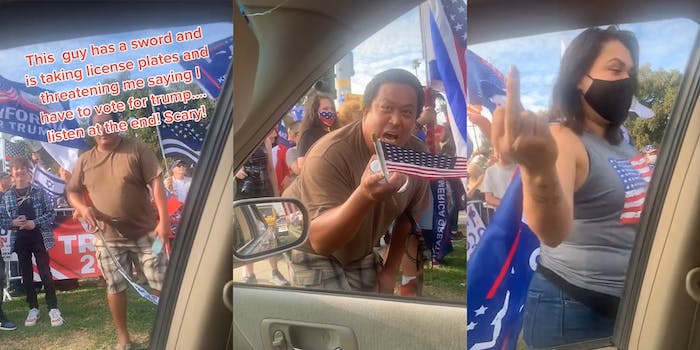 'You’re gonna vote for Trump whether you like it or not.'

Tensions are running higher than ever between supporters of President Donald Trump and Democratic nominee Joe Biden as the presidential election approaches. Voters on both sides are going to ridiculous lengths to make their support known—such as the Trump supporter who threatened a woman with a sword outside a polling place during a Trump rally in Beverly Hills.

Australian actress Ajay Rochester (@ajayrochester) uploaded the video to TikTok over the weekend, exposing the alleged “voter intimidation” that took place at a Trump rally in Beverly Hills, California. As Rochester drives through the horde of Trump supporters shouting and waving flags, one man approaches her car and begins to harass her.

“We got you now. Your mother voted for Trump,” says the man, who is holding a small Trump flag in one hand and a sword with an even smaller Trump flag attached to the tip in the other. “Your mother loves Trump, I asked her. We got your plates, we got you.”

The man then walks in front of Rochester’s car as she’s stuck in the throng and takes a picture of her license plate.

“We got your plates, baby. We know who you are now,” the man says. “You’re gonna vote for Trump whether you like it or not. You got no choice. You cannot resist Trump. We got you. We fucking got you.”

Rochester’s video has been viewed roughly 850,000 times on TikTok. It was posted to the r/PublicFreakout subreddit on Tuesday night, where it has since received more than 57,000 upvotes. In a separate post, Rochester said TikTok removed her video for violating community guidelines; it has since been restored.

In a series of follow-up videos, Rochester explained that she got stuck in the middle of the Trump rally while driving home. Trump supporters apparently gather there every weekend, arriving by bus from out of town. The rally ran for three blocks, and it was across the street from a polling place.

Rochester revealed that she reported the threatening Trump supporter to the Beverly Hills police, though they “didn’t really seem to care too much about it.” She said she was also researching where to report him for voter suppression and invited her fellow TikTokers to share his identity if they found it.

One potential cause of the Trump supporters’ fury could have been Rochester’s “Cuomosexual” shirt, though she questioned whether they could “even read.” Undaunted by her scary encounter with the pack of rabid Trump supporters, Rochester said she planned to return to the rally next weekend—this time with a Biden shirt.