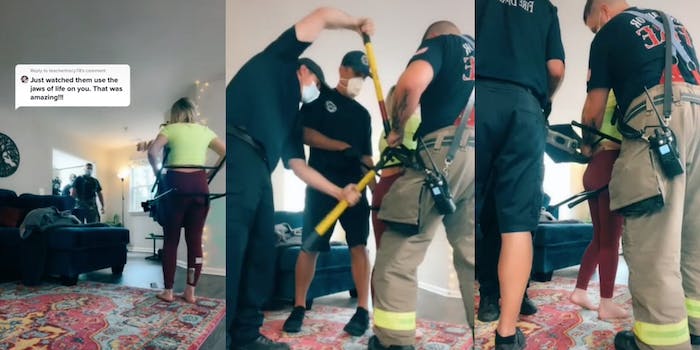 'I am stuck in a metal chair in my apartment and I cannot get out.'

A woman in Michigan had to be rescued by a local fire department after getting stuck in a chair during a botched sex fetish stunt.

The incident took place earlier this month when TikTok user Sydney Jo, who regularly posts about sex-related topics, was filming a video about a fetish involving people who are “stuck.”

Yet the explanation video became all too real when Sydney, who boasts more than 170,000 followers, discovered that she couldn’t free herself from the insides of a folding chair.

“I can’t get out of it,” she said. “I’ve tried absolutely fucking everything.”

Sydney ultimately decided to call 911 for help, resulting in a team of firefighters entering her apartment in order to separate her from the chair.

“Oh you did get stuck in there, didn’t ya?” one of the firefighters says.

An initial attempt to free Sydney with a large pair of bolt cutters failed, prompting the firefighters to bring out the “Jaws of Life.” Normally used for freeing people from car wrecks, the heavy-duty device was able to quickly cut through the chair.

In a statement on Facebook, the Ann Arbor Fire Department applauded its firefighters’ professionalism in the face of such a unique situation.

“So firefighters never know what our next incident may involve,” the department wrote. “We appreciate the professionalism and skill of the crew and are grateful the resident was not injured.”

Sydney also revealed in a statement to BuzzFeed News that she declined to tell the firefighters the cause of the mishap.

“I just said it was for a school project, because I happen to live on a college campus. So they believed it,” she said. “I definitely didn’t feel like explaining… the stuck fetish to them I was already in panic mode.”

In a follow-up video on TikTok, Sydney responded to an influx of questions surrounding how she ended up in the predicament to begin with.

“My whole TikTok is basically sex work and giving sex work advice, specifically online sex work, and ‘stuck’ is a fetish category that I am pretty popular in,” she said.

After hundreds of request, Sydney even went as far as to release the footage of her phone call with fire department.

“Hi, um, I’m super embarrassed to be calling and asking this,” Sydney begins. “All my friends told me to call you guys, but, um, I am stuck in a metal chair in my apartment and I cannot get out.”

Giving her fans even more access to videos from that day, Sydney just this week also released footage of the exact moment she became stuck.

In total, Sydney’s videos related to the incident have garnered a staggering 20 million views and counting.