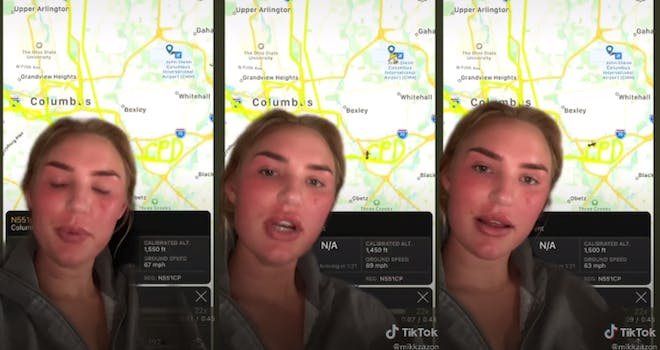 A controversial use of resources gets put on blast by a TikTok influencer.

A viral TikTok called out the Columbus, Ohio police department for taking a joy ride in a helicopter.

A map of the helicopter’s path reveals that the pilot spelled out “CPD” over a predominately Black neighborhood, according to the Columbus Dispatch. The joy ride took place on April 17 days before police made national news for killing a 16-year-old girl in Columbus.

One TikToker is calling out the police department for the waste of tax payer dollars.

“Now instead of reallocating those funds towards, I don’t know, de-escalation or community safety, they decided to disrupt Black neighborhoods,” Mik Zazon said. The TikTok influencer has 1.1 million followers and her video garnered more than 287,000 views since being posted on Wednesday.

“I’m beyond frustrated. Last summer I proposed decreasing our helicopter fleet by one—to save dollars and reinvest in community-based safety strategies. But I was told how essential our current size is, and my measure failed. Let’s be clear: a joyride is is NOT essential work,” she tweeted.

Now, students and others are rallying in Columbus for Ma’Khia Bryant who was killed by police days after the helicopter ride on Thursday.

“Ohio State students take over student union to demand OSU cut ties with Columbus Police after the killing of Ma’Khia Bryant, then march to the statehouse,” one account tweeted.

Police responded to the criticism for the helicopter ride by saying, “no calls for service were missed during this time and no additional fuel was utilized, but even the appearance that officers were not operating within the mission of the aviation section is not acceptable,” in a statement posted to Twitter.