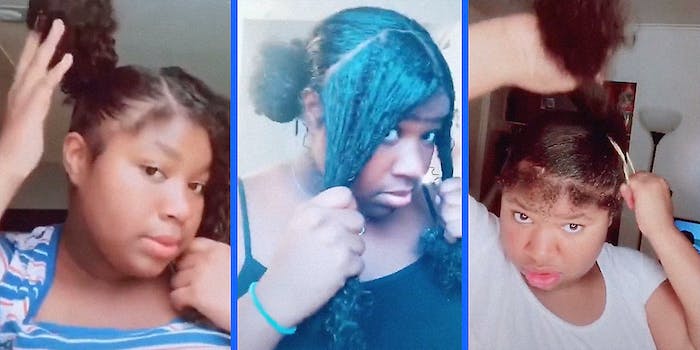 Police shot and killed Bryant, 16, after she called for help during a domestic dispute.

Ma’Khia Bryant, the 16-year-old Black girl that an Ohio officer shot and killed on Tuesday, made TikTok videos of herself styling hair and dancing, serving as a reminder for many that she was just an ordinary teenager.

A Columbus, Ohio, officer fatally shot Bryant after she called police to her foster home during an altercation. Bryant was reportedly holding a knife, when the officer, still unnamed, fired four rounds on her.

On Tuesday, as the country mourned her amid some relief about a guilty verdict for Derek Chauvin, people on social media began sharing videos of her TikTok account where she had a little over 6,000 followers. The number of followers and views on her account was increasing by thousands during the course of this reporting.

On Bryant’s TikTok, where she posted her first video in May 2020, she regularly shared videos of her making braids, styling her hair, and doing her make-up.

In one video, she does her hair for the “Don’t Rush” challenge, parting her hair, applying mouse and hair gel, and zooming her hand into the camera, before appearing with her hair fully transformed.

In another video from November, she does her hair in a side ponytail to the song “Don’t Rush,” ending the video with a flying kiss to her viewers. Other videos show her dancing on TikTok.

“These are the only kinds of videos we will ever circulate of Ma’Khia. We will never ever curate our trauma, we will never circulate our abuse and death,” said the description of the video, which had been viewed more than 65,000 times in a few hours.

It was perhaps especially important to see Bryan’ts videos given the value that hair holds for Black women.

“For Black women, hair is racialized, gendered and classed,” author Nadia E. Brown wrote in an essay following the Gorilla Glue saga in February. “It also carries cultural and social meanings. Hairstyles indicated a person’s background, social status and tribe in early African civilizations. In this manner, everything that you would want to know about a person was communicated via her or his hairstyle.”

Bryant’s videos, which portray both the normalcy and enthusiasm of a teenager, conjured a new kind of grief and frustration among viewers.

“I actually can’t do this today,” wrote one user in one of her TikTok videos.

“My heart is aching this isn’t fair she was a baby,” wrote another.

“She was literally a kid bro. 4 times and she called THEM for help,” wrote one user who called for Bryant’s killer to be punished.

A Twitter user shared one of her videos to illustrate that Bryant had the rest of her life ahead of her before she was killed.

“I am reminding you of her childhood because I know most of you don’t see her as a kid. Because you’ve been programmed not to. That makes you deadly to girls like her,” @thespinsterymc wrote. “Black teen girls are children.”

An investigation into her killing is underway.