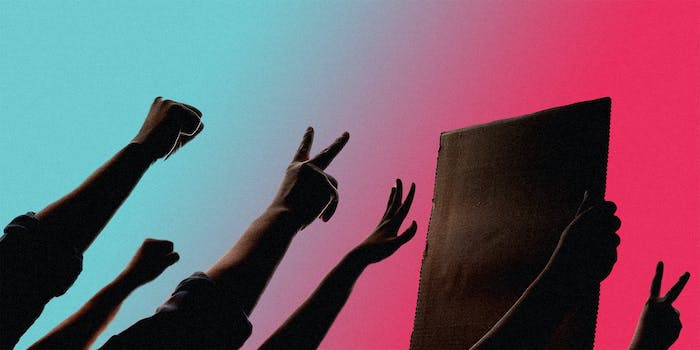 In July, in response to labor disputes across the country and calls for a higher minimum wage, a TikTok account started calling for an Oct. 15 general strike. The page soon gained traction among online leftists, with many creators asking their followers to call in sick, to do their best to grind economic activity to a halt.

The event was supposed to be a one-day general strike, where young people across industries walked out or called in sick to their job, slowing productivity in a wide variety of sectors. While the strike gained traction quickly, problems began to arise. Activists were divided over the length of the strike, the seemingly disorganized and anonymous leadership, and the vague list of demands.

Things quickly fell apart when the group’s disorganization became apparent in its Discord channel. In the chaos, the original creators of the strike left the group and the organizational duties were left up to an anonymous cast with seemingly no organizing experience. What appeared to be a well-intentioned effort turned out to be spearheaded by people who did not fully consider the stakes of asking people across the country to walk out of their jobs—with or without the backing of a union that could protect them. The group did not have organizational leadership that was publicly available until September.

One interested TikToker, Sampson Spadafore (@trans_agenda), joined and then quickly left the group’s Discord after seeing the disfunction.

“Turns out the original organizers have left because they did not do the math of how this will work,” Spadafore said in a viral TikTok in July. “There’s just random people trying to organize this at this point.”

The group’s Discord was the main place for members to organize and mobilize, but they’ve since abandoned it, after criticisms about the lack of vetting for admitted members and dysfunction within the server.

Spadafore, an organizer from a union family, immediately had qualms about the strike.

“Anything that involves striking that starts on social media is suspicious to me,” they said in an interview. “So a general strike normally would go to unions and try to do a mass strike, but would have the unions all vote individually to kind of coordinate that. But this team of people … they didn’t necessarily do that part, they kind of went straight for the mobilizing aspect.”

There was a fundamental misunderstanding within the movement of how to plan a strike. Without the backing of powerful unions or mutual aid funds, a mass labor strike—across all industries, in all states—planned on social media was doomed to fail. With so much at stake, and almost no safety nets set up, the strike started off on shaky ground and crumbled from there. The life cycle of a viral TikTok meant that the strike was planned too far ahead for it to stay relevant. And the timeline for planning a real-life labor strike can take years, putting the movement in this limbo of being simultaneously too fast yet too far ahead.

Another TikToker, @hungryrye, also posted about leaving the Discord after a poor experience with the organizers.

“The event was posted and the date was decided prior to any unions being contacted or financial safety nets being in place or mutual aid groups being involved,” they said in a TikTok.

In a separate video, @hungryrye argued that for a movement at the scale of a national strike to work, intersectionality is key.

“I talked to three of the organizers and they did not know what intersectionality was, or the value of it,” they said.

They also disagreed with some organizers wanting to bring Republicans into the movement for fear of tainting the movement or it being co-opted. Spadafore, on the other hand, made it clear that a strike could not be impactful without the help of right-leaning union workers. Spadafore also said that, while the movement had a lot of momentum on TikTok, no one outside of the app seemed to be talking about it.

After the initial wave of coverage, the official strike posts screeched to a halt. The strike accounts on TikTok and Instagram haven’t posted since late July. The Twitter account for the strike was hacked in September and is seemingly being held for ransom by the hackers.

Shortly after the hack, Labor Movement X—an activist group formed out of the idea for the general strike—started posting about the event on Twitter and TikTok. Slowly, though, their posts and demands became more vague. The original demand for a $20 minimum wage is now a demand for “adequate and fair wages,” and a 25% corporate tax rate demand has been boiled down to “fair taxes.” Representatives for Labor Movement X did not respond to the Daily Dot’s request for comment.

Posts from other accounts dried up as well. The strike hashtag and subject on TikTok shows videos mostly from July and August, with very little recent content.

Spadafore said he believes the movement has fallen off because of a lack of trust.

“If you want people to leave their jobs, put their livelihoods at risk, you have to trust the person that’s behind this,” they said. “If we don’t trust them, then there’s no way you’re going to get a whole movement of people. What I was really worried about is—and I don’t think [the strike] will happen really—but young people who are really gung ho about it and who are going to try to leave their work anyways who don’t have the majority of their workplace organized.”

There’s also a basic lack of understanding among TikTokers about striking. And organizers of the strike haven’t been useful in keeping them informed.

Some eager TikTokers are convinced that a worker cannot be fired for striking, regardless of union status, despite legal ambiguity on this issue. The National Labor Relations Act protects employees from being fired for striking at their workplace, but only for select kinds of strikes for specific reasons. Also, the NLRA does not mention general strikes as a protected strike class.

The people that were excited about the strike should be hopeful, according to Spadafore. The recent Kellogg’s strike, the John Deere strike, the imminent IATSE strike, and workers leaving their jobs at record rates are all indicative of a larger labor movement.

“I think that there is already so much that is unstable in our entire labor force right now that we’re going to see more things like Kellogg’s strikes and people quitting en masse,” they said. “I mean I’ve seen countlessTikToks of fast food workers just walking out all at once. The movement is already underway … you’re not going to see it all happening all at once, it’s going to be slow and steady.”

But for the next big strike to come from TikTok, there’s going to need to be a better plan in the future.