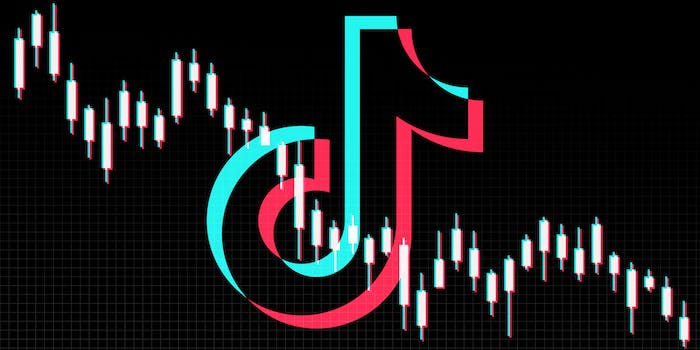 Stock market experts abound of TikTok. Be wary of what they are selling.

The video starts simple, with Adam, a bright-eyed brown-haired teenager staring into the camera, his background a screen from stock software. At the top of the clip is the title “Ethereum is Exploding!” Adam boldly proclaims “I really hope you bought Ethereum because it’s exploding right now!” The young TikToker, also known as teen.executive on social media, is a slowly growing resource of knowledge that many may turn to in their young years. After all, taking investment advice from a 14-year-old makes sense, right?

TikTok has become a common platform for young men and women who want to consider investing in the stock market. Thousands of accounts recommend that people invest in select stocks, claiming that they are making massive amounts of profit through short-term stocks and trades. These conversations are often occurring under the hashtags #fintok and #stocktok. These hashtags have earned hundreds of millions of views over the last year, with the personal finance tag receiving more than four billion views.

The new trend of #fintok and #stocktok all find their origins in 2020. In March 2020, the stock market entered a “Bull market,” where stock prices consistently rose. As COVID-19 came into play, so did the stimulus checks provided by the U.S. government. This market was the perfect opportunity for millennials and Gen Z to “invest their stimmies.”

The first stimulus checks arrived concurrently with a shift in the betting market. With sporting events canceled, many Americans found themselves bored, without a game to bet their money on. So millions downloaded their preferred brokerage app and began investing. Apps like Robin Hood, Acorn, and others saw significant success as users began investing small quantities into the market with the click of a button. But users did not want to keep it all to themselves.

The #fintok and #stocktok hashtags gained traction around the same time as Reddit’s Wall Street Bets (WSB). Originally founded in 2013, the WSB subreddit was dedicated to an aggressive-yet-profane approach to day trading. WSB doubled its population over 2020, offering stock insights to nearly 1.6 million traders in December 2020.

Then came the Gamestop squeeze. WSB members were able to push up the value of Gamestop stocks 600%. It was a moment that captured the attention of millions, inspiring many to consider the idea of investing.

“Because of /r/Wallstreetbets, my youngest son had a bunch of friends who were talking about starting an investment club.” Says John Pelletier, director of the Financial Literacy Center at Champlain University. “One of the friends told my son that he owns twenty stocks in a company that was selling for less than a penny. That friend said he heard about it through TikTok. That blew my son’s mind.”

Robin Hood and WSB all point to a significant surge in what analysts call “active trading” or day trading. An active trader typically focuses on trading stocks and options several times over a short period, with the hope that they will make a profit.

A significant portion of the #fintok community’s content is oriented toward a day trading model. Creators will often promote their favorite stocks, explain day trading practices, and hype up how amazing day trading is as an investment approach. For many viewers, #fintok is often one of the first places that potential investors are exposed to investment ideas. A 2019 survey found that only 57 percent of Americans were financially literate, implying a lack of understanding of financial concepts and investment practices.

“TikTok is just the newest platform for promoting financial resources to those who don’t know anything about finance,” says Gust Kepler, CEO of the stock trading software company Blackboxstocks. Kepler believes there is immense value in these communities, as they’re helping breach the gap and bring new investors to the market. Having simple videos explain complex things like Roth IRAs and call options is a net positive gain.

But there’s something missing from a lot of what is expressed on #fintok that may affect its trustworthiness. Kepler says that TikTok is also the newest platform for promoting financial misinformation and misleading claims. “These creators are out there, talking about how much money they made. In many cases, they may have a position in a stock, or they may be trying to sell the user something.”

For example, meet The Daily Trader, a self-described “19-year-old stock market millionaire” with 650,000 followers. who claims to make $150,000 a month through trading. TDT runs a Discord server with 124,000 members, where he provides stock information and investment recommendations. The public server is free, but TDT offers readers access to his Private Mentorship Group Discord Server for a one-time fee of $294.

TDT is just one of many creators who are trying to sell their courses to viewers, claiming massive profits and selling resources that will supposedly help the purchaser make a similar level of money. Some creators will offer access to premium Discord channels, where users will get stock and options alerts from self-described analysts. Others will sell a course, which lays out the tricks of investing. And others will typically turn to affiliate marketing; encouraging users to download their app of preference. In several cases, the ‘experts’ in these investment methods don’t have a formal education in finance or investing. They’re merely promoting what they see as valuable.

If users wish to spend the money on investing resources, that is their decision. However, very few of these day trading promoters on TikTok note the amount of risk involved. A 2019 study looked at Brazilian day traders between 2013 and 2015 to see if they were able to make a profit. The researchers found that 97% of traders who participated for at least a year lost money. Only 1.1% made more than the minimum wage. That led the researchers to conclude that “it is virtually impossible for individuals to day trade for a living, contrary to what course providers claim.”

There are also ongoing concerns about pump-and-dump schemes on TikTok as well. Both Kepler and Pelletier voiced concerns about TikTok influencers hyping up particular stocks without disclosing their own investments in said stocks. However, neither of them was able to point to specific cases where anyone was caught doing so on TikTok. The only known instance of TikTok directly influencing a stock or cryptocurrency was in July 2020, when several accounts tried to get viewers to buy DogeCoin, a meme currency. Dogecoin’s value rose by 96 percent in a day, only to crash immediately after.

When asked about its investigations into pump and dump schemes, the Securities and Exchange Commission and TikTok declined to comment.

A spokesperson from TikTok told the Daily Dot that “We do not permit anyone to exploit our platform to harm others, which includes schemes to defraud individuals or steal assets. This includes content that promotes Ponzi or pyramid schemes and content that promotes fixed betting, get-rich-quick schemes, or any other types of scams.”

But advice that may cause many to lose money? Perfectly OK.