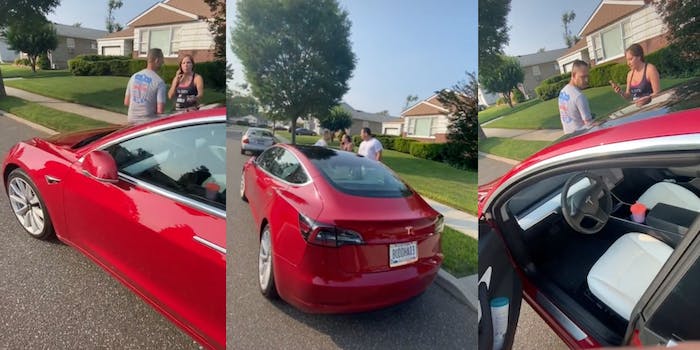 The purported NYPD sergeant reportedly sat on the man's car for 'blocking his driveway.'

A TikTok user shared footage on Monday of an alleged police sergeant sitting on the hood of his vehicle while drinking.

The video, which has been viewed more than 430,000 times, shows Brandon Drebsky approaching his vehicle as the supposed member of the New York Police Department (NYPD) argues with a nearby woman.

The short clip concludes with Drebsky repeatedly asking the man to get off of his vehicle to no avail.

Drebsky states in the video’s comments that the man had sat on his hood after accusing him of “blocking his driveway,” an allegation he says is disproven by the footage.

The TikToker described the incident as part of an ongoing altercation with the man, who has allegedly thrown unspecified items at the vehicle as well as placing his garbage cans up against it.

When asked in the comments how he knew the man worked for the police, Drebsky stated that the man’s wife had announced it during the argument.

“His wife kept yelling his name and telling him to stop because he’s a cop and she kept saying ‘do you want to lose your job?'” Drebsky wrote.

Drebsky says the police later arrived and took a report. It remains unclear if any further action was taken.

The Daily Dot reached out to the NYPD to inquire about the man’s alleged employment but did not receive a reply by press time.

Drebsky later clarified in the comments that he does not live in the same neighborhood as the alleged officer but frequently parks outside of his home while visiting his girlfriend.

Users in the comments argued over who was in the wrong, with many accusing the alleged officer of bullying.

“Worst trained and most corrupt department,” one user said.

Yet many users appeared to side with the purported sergeant, arguing that the TikToker was parking much too close to his driveway when there was ample room elsewhere.

“Why are you so close to his driveway?” another user asked. “That would piss me off too.”

The Daily Dot was unable to reach Drebsky for comment.