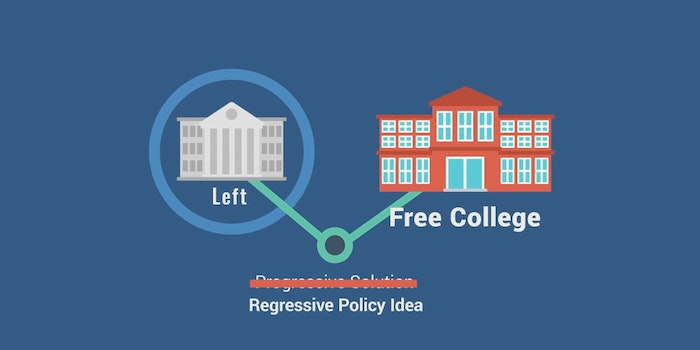 The tweet links to a piece on Third Way titled ‘Why Free College Could Increase Inequality.’

The account achieved truly one of the wildest Twitter ratios I’ve ever had the good fortune of witnessing. A recent tweet from the account garnered about 4,700 replies while only raking in just below 400 likes.

The tweet links to a piece on Third Way titled “Why Free College Could Increase Inequality” that was written as a response to a plan unveiled on Monday by 2020 hopeful Bernie Sanders. The plan puts forward a law that would entirely erase the crushing student loan debt affecting millions of people in America.

The plan was co-authored by Rep. Ilhan Omar (D-Minn.) and Rep. Pramila Jayapal (D-Wa.). It includes the details that it will entirely “cancel all $1.6 trillion in existing student loan debt and make public colleges and universities tuition and debt free.”

Student loans are a scam.

That’s why I join @BernieSanders, @RepJayapal & @IlhanMN to forgive ALL student loans AND make colleges tuition-free.

PS: for the cost of the GOP tax scam (~$2 TRILLION), we could’ve already forgiven every student loan in America w/ billions left over. https://t.co/GXRHHWoKai

Third Way describes itself as an organization that is constantly “fighting for opportunity, so everyone has the chance to earn a good life.”

The bottom 80% hold $1.1 trillion of the $1.6 trillion total student debt. How much of this proposal goes to the top one-tenth of one percent? Nothing.

Not to mention it will cut the racial wealth gap by *more than half* for young households. #CancelStudentDebt https://t.co/04xvAUEMgs

Guys, can any of you upgrade into just lobbying directly for Wall Street firms?

Some criticisms have been more juvenile yet just as cutting.

Additionally, the Sanders campaign has released a debt calculator to mirror the online tool that Elizabeth Warren released when she recently unveiled her plan to alleviate the national student loan debt.

If you’re getting crushed by student loan debt, there’s a good chance our new bill will help. Use my calculator to see how much of your debt would get canceled under the Warren-Clyburn proposal: https://t.co/5ii8O6kr2U #CancelMyDebt

So what’s the formula for Bernie’s debt calculator? Well, take the current amount you owe in student loans, multiply it by the percentage that New York Mayor Bill de Blasio is currently polling at and you’ll end up with how much you’ll owe if the plan comes to be: $0

(Hint: Multiplying any amount you owe times 0 will always net you $0 as your new debt amount).