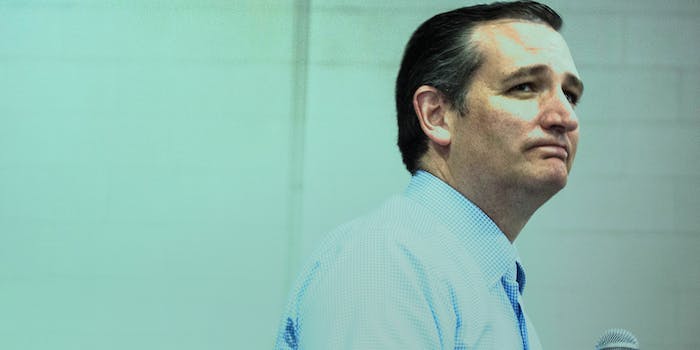 The GOP's mortal enemy isn't Hillary Clinton after all.

Donald Trump‘s 2016 Republican rivals have found a way to steal his thunder.

In the first two Republican debates, Trump dominated the conversation. The real estate heir and reality TV star’s celebrity, combined with his willingness to unabashedly give voice to a large swath of the Republican base like no other 2016 candidates could, rocketed him to the top of polls and made him the talk of social media.

However, according to an analysis of conversations about Wednesday night’s debate at the University of Colorado Boulder compiled for the Daily Dot by social media management firm Spredfast, Trump’s novelty may be starting to fade.

Both Texas Senator Ted Cruz and retired neurosurgeon Ben Carson were mentioned far more frequently than Trump. There were just over 1 million tweets sent out regarding the debate over the course of Wednesday evening, at a rate of 8,670 tweets per minute, according to Spredfast’s analytics. Here’s how many tweets were about each candidate:

Cruz clearly dominated the conversation, and he was able to do so by using one of the oldest and most reliable strategies in the Republican playbook: attacking the media.

The biggest spike of the evening came at 8:46pm ET, when Cruz slammed the debate’s moderators, accusing the team from CNBC for asking questions aimed at sparking conflict between the candidates rather than elucidating policy issues. At its apex, the social network was producing 4,631 tweets per minute about Cruz’s attack on the moderators, which drew nods of agreement even from critics across the ideological spectrum, such as comedian Patton Oswalt.

I hate Ted Cruz with the power of a million chainsaws revving but I agree with everything he just said. #GOPDebate

To be fair, Spredfast’s data shows the moderators were largely just giving the people what they wanted. None of the most-tweeted-about moments in the debate revolved around in-depth policy questions. Personality issues and individual grievances sparked far more interest. But there was another trend: Many of the other most popular moments also came when candidates bashed the media.

When they asked about whether the daily fantasy sports industry should be regulated by the federal government—a seemingly relevant question about the candidates’ regulatory philosophies coming in the wake of an insider trading scandal at industry leader DraftKings—New Jersey Gov. Chris Christie generated significant buzz by attacking the question as largely irrelevant and the questioner as ruder for having asked it.

Similarly, Florida Sen. Marco Rubio had his biggest moment of the night when he said that Democratic frontrunner Hillary Clinton effectively had a super PAC supporting her, the mainstream media.

Marco Rubio: The media said it was the best week for Hillary, but she was exposed for lying to the American ppl #GOPDebate #tcot #Rubio2016

Not of the topics drawing swells of conversation for the candidates were positive. Carson, whose current second-place position in the polls mirrored his standing in the hierarchy of Twitter conversations, had his biggest moment of the night when moderators questioned his relationship with controversial health-supplement company Mannatech.

While focusing on the media provided bumps for many candidates, riding on the coattails of Trump’s celebrity was still a reliable way for other candidates to get attention. Former Arkansas Gov. Mike Huckabee’s biggest moment came when he admitted he was wearing a Trump-branded tie during the debate.

The biggest loser of the debate, however, may have been CNBC. In addition to the popularity of comments trashing its moderators, the overall volume of tweets about the channel’s debate 50 percent of less than that of previous debates.