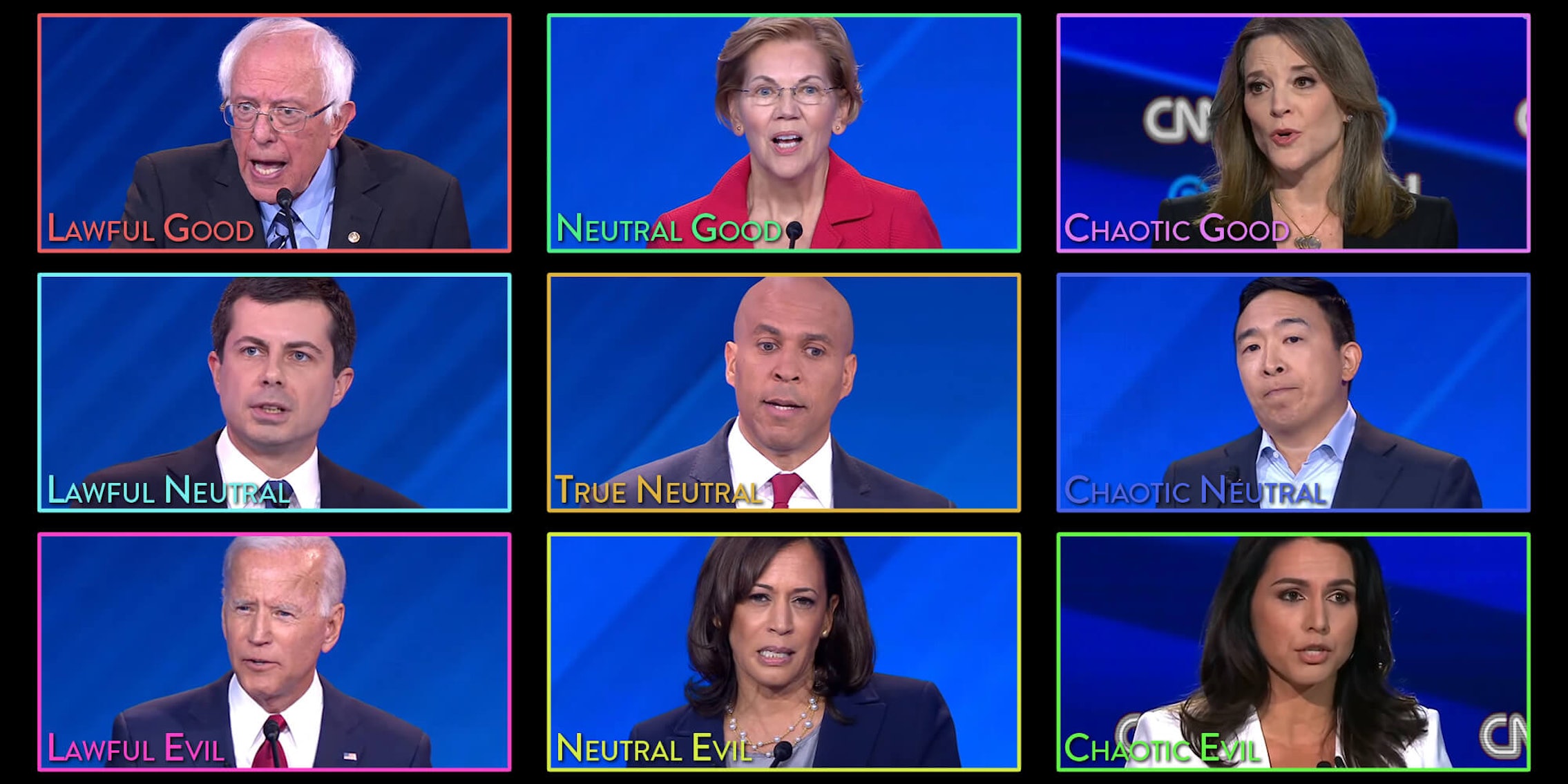 You know what Tulsi is...

Let’s face it, with seventeen Dems still vying for the nomination to face down President Donald Trump in 2020, the primary is feeling downright chaotic. Scroll through the slew of candidates, including late arrivals like billionaire Tom Steyer, and they all start to blend into a big, poorly seasoned soup. Having trouble parsing one bland option from the next? The solution may be the comfort of a trusty meme: the alignment chart.

Alignment charts often float around on social media. They’re those neat little nine-square grids that organize fictional characters, celebrities, and other elements of our world into categories of good and evil on one axis, and chaos and order on the other.

Just like it’s good to know your candidates, it’s worthwhile to know your memes. Alignment was created way before the dawn of the internet. Back in the 1970s, when folks played IRL RPGs, Dungeons and Dragons included this tool for designating a character’s moral outlook, and thus predicting how they might behave in different settings.

When mapped onto real people, alignment can’t necessarily predict any one person or candidate’s behavior. And it certainly can’t tell you who to vote for. But it can take things that feel totally messy and sort them into a series of tidy squares to soothe our reason-starved brains.

Any of Bernie’s devoted supporters including AOC and Rep. Ilhan Omar (D-Minn.) would be quick to laud Bernie’s moral superiority. The internet is littered with images of Saint Bernie. And let’s not forget that little bird who literally flew up to greet him at the podium in 2016. Birds and socialists all agree. Bernie is good. But he also wants to start a revolution. No doubt about it, Sanders wants to smash capitalism. His 2016 book was titled Our Revolution so you may mistake him for a chaotic type. But look a little closer and you’ll see that he’s lawful, through and through.

As a self-avowed democratic socialist, Bernie has staunchly orderly beliefs. He wants to create and expand socialist structures for the common good. And even his “wildest” ideas—Medicare for all! Free higher education!—aren’t that wild or new. They’re just good, old-fashioned socialism.

Like Sanders, Warren is a very good egg. She taught children with disabilities and then went on to become a lawyer and law professor specializing in bankruptcy law. She worked tirelessly to protect consumers. Warren understands the law very thoroughly, but she’s not always about sticking to rigid systems and structures.

Unlike Sanders, she’s a self-proclaimed capitalist who believes in strongly regulated markets. She sees value in the theoretical freedom that capitalism promises its supporters, but she believes she can implement just enough order to make it work. More simply put she’s willing to follow the rules or break them or make rules that are different from what we’ve seen in the past, as long as she thinks it will ultimately create more good.

If you want chaos with a heart of gold, girlfriend, you are so on. Williamson’s platform is drenched in spirituality and a whole lot of sass. Williamson, who gained her notoriety as a spiritual advisor to celebs like Oprah and Gwyneth Paltrow, is the author of several best-selling self-help books. She’s basically a good witch—think Glinda, but instead of appearing post-tornado, she’s in the eye of one she built herself. She’s said there are “dark psychic forces” at work and she’s willing to do what it takes to stop them.

Williamson loves to challenge the status quo and her plans for a “Department of Peace” and reparations for African Americans exemplify her dedication to doing things differently. At times, however, her chaotic nature can get her into trouble. Some of her problematic statements about anti-depressants and vaccines have drawn criticism. But Williamson insists that her priority is “deep truth-telling.” She’s ready to meet Trump “on the battlefield” and positively destroy him over with the most powerful weapon of all: love.

If elected, Buttigieg would be our first LGBTQ president. But if he were a cereal he would be plain Rice Krispies. The South Bend, Indiana mayor has an unflinchingly cheerful but quiet disposition. He’s always calm, always polite, and never too splashy. His campaign slogan, “Win the Era,” encapsulates his lawful neutral energy. Rather than moralize against his foes, Buttigieg employs logic and reason. For instance, in 2018, when an anti-abortion group sought re-zoning that would allow them to occupy property directly next to a proposed abortion clinic, Buttigieg rejected the re-zoning without adopting a position.

Instead, he argued, “I don’t think it would be responsible to situate two groups, literally right next to each other, in a neighborhood, that have diametrically opposed views on the most divisive social issue of our time.” He also said, “Issues on the legality or morality of abortion are dramatically beyond my paygrade as a mayor.”

The New Jersey senator is running on a campaign of compromise. Because of his deep willingness to compromise, Booker appears neither lawful, nor chaotic. His attitude towards order, like his attitude towards morality, is neutral. Some of his proposals include “baby bonds,” which would basically create a trust fund for every American child and safe, affordable housing for all. These may sound like noble causes, but if you follow the money, Booker has no problem rubbing elbows with Wall Street to provide social benefits.

For example, the former Newark mayor is a supporter of charter schools, which are notorious for busting up teachers’ unions and privatizing schools so that they’re controlled by corporations and other funding sources. Booker isn’t a Wall Street wolf, nor is he an Obama-like grassroots community organizer. He’s just a true neutral, doing what true neutrals do best: making pacts with good guys and bad guys and hoping it all works out okay in the end.

As the writers at The Daily Show so succinctly put it, Andrew Yang truly is the cash cab of Democratic candidates.

BETO: We need to stop gun violence
BOOKER: I can unite the country
YANG: Guess what, America? You just got in THE CASH CAB

Yang has entrepreneurial roots and it shows. His humanitarian spirit is often obscured by his general enthusiasm for doing things innovatively. He’s promising every American a “Freedom Dividend,” which is basically a monthly paycheck of $1,000. He’s a proponent of Medicare for All, but he’s also all about “human-centered capitalism,” a concept which I truly have tried and yet cannot wrap my brain around. He also recently retweeted a Marianne Williamson fundraising bid, but unlike Williamson, he’s less concerned with talking about trauma and love and more of a fan of talking about money. Lots and lots of money, which, honestly, may be the most chaotic neutral of all.

New York Magazine recently called Biden’s presidential bid, “the zombie campaign,” and it’s not hard to see why. No one was hoping the former veep would run, and he doesn’t seem to be in shape to do so, but here he is, risen from the dead, hitting the trail and playing by the rules. Some of the rules include accepting huge donations from super PACs, a morally dubious choice considering he previously opposed super PACs for the undue influence they could have on political leaders to pander to special interests.

Oh well! All’s fair in love, war and consolidating power to old white men. Especially when it’s within the laws they wrote.

Like any good villain, Harris has a tendency to cackle at her own jokes, which personally, I find endearing. What’s not so endearing is her history of incarcerating minorities and black teens during her time as California’s attorney general. Currently serving as a California senator, Harris has built an image of herself as a “progressive prosecutor,” but many have been quick to point out that the image she’s presented does not line up with her history.

The wrongful conviction of Jamal Trulove, and Harris’s support of shutting down Backpage.com, a website sex workers used to keep themselves safe, stand out as a couple of upsetting examples. When pressed on divisive issues Harris often answers, “I think we should have that conversation.”

Harris is adamant that her campaign is in supportive of progressive causes, arguing that, like any good neutral, she played by the rules so she could one day break them.

According to critics, Tulsi Gabbard isn’t just chaotic, she’s un-American. In 2017, she visited Syrian President Bashar al-Assad. Why is this such a big deal? Because Assad used chemical weapons against his own people. As the U.S. representative from Hawaii, she voted against a House proposition that would condemn Assad’s acts as war crimes, and recently, she doubled down on her choices, saying Assad is “not the enemy of the United States.”

Gabbard argues that having been in combat she’s willing to meet with whomever she must to avoid war at all costs, but her unwillingness to condemn Assad’s actions is troublesome. As is her history of being anti-LGBTQ rights and anti-reproductive rights. She has since adopted a more progressive stance but her chaotic approach to change is troublesome to say the least.

That and… everything else.