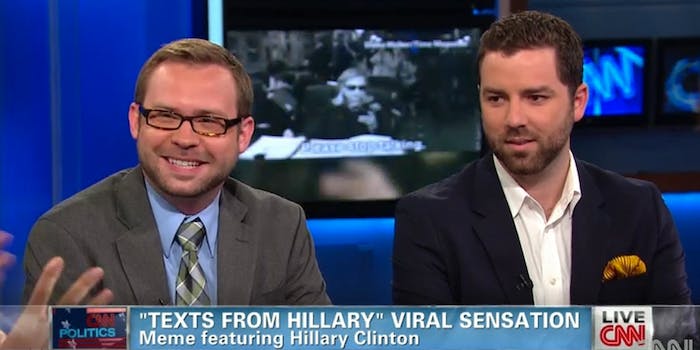 Bring the popular meme to a fitting end, Stacy Lambe and Adam Smith discussed the Texts From Hillary blog on Starting Point.

The creators of Texts from Hillary are now in the television appearances portion of their charm offensive.

Stacy Lambe and Adam Smith appeared on CNN’s Starting Point Thursday morning and chatted with host, Soledad O’Brien, about how their Tumblr quickly blew up in popularity. Other talking heads flanked the table, but they mostly looked confused what they were doing there for the three-minute segment.

The blog started after the guys discussed the iconic, black-and-white picture of Hillary Clinton texting on her phone at a bar last week . Smith broached the idea of starting a meme out of it, and Lambe thought of the title. The rest is reblogged all over Tumblr.

After O’Brien stumbled through some of her favorite images for what seemed like an eternity, she asked Lambed if he was surprised that the blog took off so fast.

“We knew we created a meme that was fun, authentic, and got people involved,” explained Lambe adding that Twitter, Tumblr, and nods from press outlets help grow its popularity. Lambe said his favorite image was Meryl Streep texting Clinton for brunch plans.

So why did they abruptly end the blog? “Once you meet the subject of your meme, I think that it’s very hard to top that,” said Smith.

Lambe and Smith met Clinton on Tuesday, and she said she “loved” the site. Also, the picture of the guys with Clinton was her idea.

“Which I wanted to do, but I didn’t want to ask her,” laughed Lambe.

Talk about a picture perfect ending.