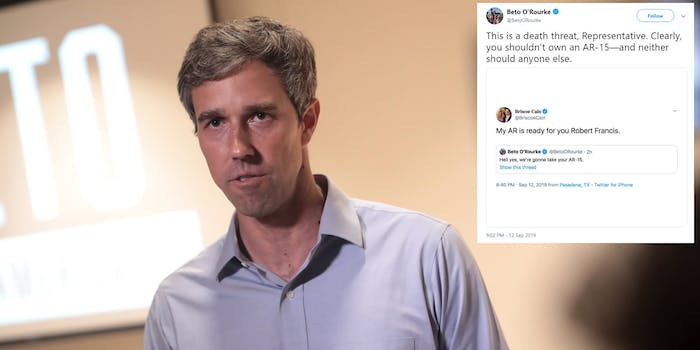 A tweet directed at 2020 hopeful Beto O’Rourke from a Texas state lawmaker was removed because it violated the companies rules on threats and also reported to the FBI by the O’Rourke campaign.

On Thursday night, during the third 2020 Democratic debate, O’Rourke said he supported a gun buyback program for assault weapons, adding: “Hell yes, we are going to take your AR-15, your AK-47 … We aren’t going to allow it to be used against our fellow Americans anymore.”

Around the same time, O’Rourke tweeted a screenshot of Cain’s tweet, calling it a “death threat.”

“This is a death threat, Representative. Clearly, you shouldn’t own an AR-15—and neither should anyone else,” O’Rourke’s account tweeted.

This is a death threat, Representative. Clearly, you shouldn't own an AR-15—and neither should anyone else. pic.twitter.com/jsiZmwjMDs

The “AR” tweet from Cain was removed by Twitter because it violated a rule that “you may not threaten violence against an individual or a group of people,” a company spokesperson told the Dallas Morning News. It was no longer visible on his profile on Friday morning.

O’Rourke’s campaign told a CNN reporter that they were reporting the tweet to the FBI.