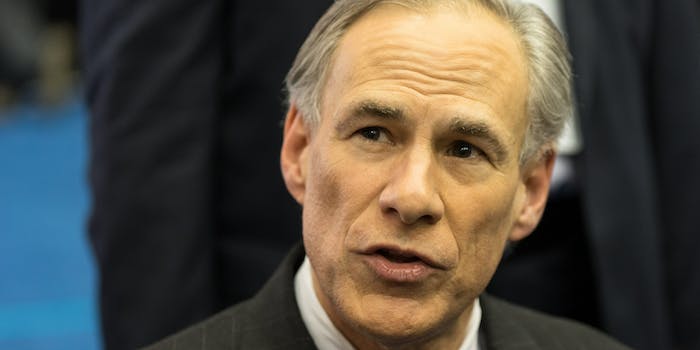 Violence against journalists is just a joke to some politicians.

Committing violence against journalists is apparently just one big joke to some politicians.

Two days after Greg Gianforte, the newly elected Republican congressman from Montana, was charged with assault for allegedly body-slamming a reporter, Texas Gov. Greg Abbott upped the ante by joking about threatening to shoot reporters.

“I’m gonna carry this around in case I see any reporters,” Abbott joked, holding up a target sheet pocked with bullet holes.

"I'm gonna carry this around in case I see any reporters," @GovAbbott joked. https://t.co/ME7X8nbVx5

Abbott’s joke, delivered while he was literally surrounded by reporters, followed the governor’s signing of a new law that reduces the cost of a license to carry permit in the state. First-time licensees will pay just $40 under the new law, down from $140, and the law reduces renewal fees from $70 to $40.

Gianforte’s alleged attack on Guardian journalist Ben Jacobs on Wednesday has sparked a debate over aggressive antipathy toward the press in the era of President Donald Trump. During the 2016 campaign, Trump repeatedly targeted members of the media—somtimes by name—as dishonest and bad people. As president, he’s called the press the “enemy of the American people” on multiple occasions and continually refers to mainstream media outlets as “fake news.”

Republican lawmakers and conservative commentators either defended Gianforte’s actions or, like Abbott, joked about the violent incident.

Jacobs is not the only reporter to be abused or otherwise targeted in recent weeks. Earlier this month, reporter Daniel Heyman was arrested in West Virginia after asking Health and Human Services Secretary Tom Price about pre-existing conditions under the GOP healthcare legislation. And last week, John Donnelly a veteran reporter with CQ Roll Call said two security guards at the Federal Communications Commission pinned him against the wall after he asked FCC Commissioner Michael O’Rielly a question.

As the Washington Post reports, violence against journalists is not a new phenomenon, and some reporters used to carry daggers to protect themselves against aggressive politicians. America isn’t there yet, of course, but it’s telling that self-defense has returned as a concern of the Fourth Estate.