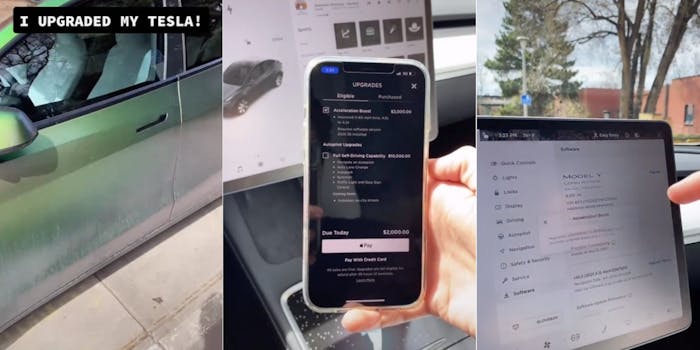 'Did you just pay for something the car was already capable of?'

Tesla is being compared to predatory video game companies after a TikTok user with one of the automaker’s vehicles purchased an unimpressive “acceleration boost.”

A user known as @modelyflex, who, as his name suggests, owns a Tesla Model Y, shared video this week of himself spending $2,000 in order to increase his car’s speed.

After making the purchase, the dual motor electric vehicle, which accelerates from 0-60mph in 4.8 seconds, increased its speed by 0.6 seconds.

TikTok users responded by comparing the upgrade to a DLC, a term that refers to “downloadable content” that can be added on top of a complete video game.

DLCs, or microtransactions, according to critics, offer a way for video game companies to charge users for upgrades that many believe should have been available from the beginning.

“And I immediately lost all interest in buying a Tesla,” a TikTok user named Matt said. “I’m not going to pay extra if the car was already capable of going that fast.”

“If EA or Activision made cars they would be Tesla,” @HornyNooting wrote. “Giving you half the product for full price, making you unlock the rest for a premium. Just pathetic shit.”

But supporters of Tesla were quick to defend the company, arguing that such practices have been commonplace in the auto industry for years.

“This isn’t new guys,” @TKOIII_ said. “Auto manufacturers for decades have been putting out gas cars with detuned engines and offering a faster version for more money even though the faster versions costs them the same amount to make.”

“Tesla is what happens when desperately credulous nerds meet torrents of surplus capital desperate for a crumb of profit and the two do an awkward slow dance on the edge of a yawning precipice called the American economy,” @as_a_worker added.

The Daily Dot reached out to Tesla to inquire about the acceleration boost feature but did not receive a reply by press time.