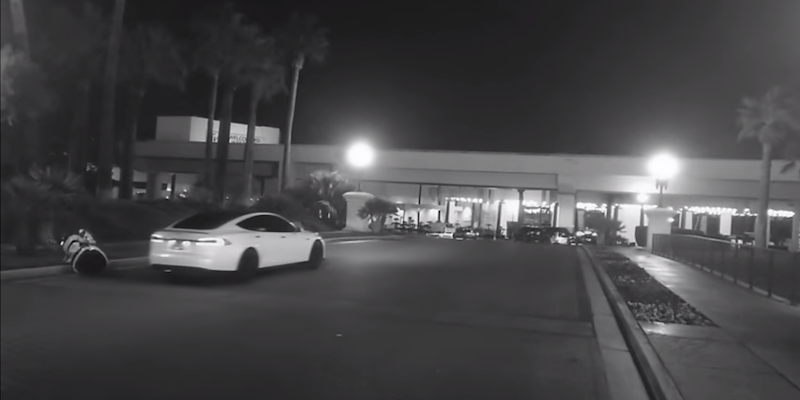 Is this Tesla ‘accident’ just a PR stunt for a robotics company?

Even advanced technology has its bugs.

In the latest of numerous mishaps with self-driving cars, a Tesla Model S operating in “autonomous mode” reportedly struck an expensive humanoid robot from Promobot in Las Vegas ahead of this week’s International Consumer Electronics Show.

The Tesla vehicle was occupied by a single passenger at the time of the accident, according to Daily Mail, but it was operating autonomously. The passenger, George Caldera, was not injured, but Promobot’s chief business development officer Oleg Kivokurtsev said the robot—with an estimated value of around $25,000—suffered “serious damage.”

Caldera told Daily Mail he had assumed the vehicle would avoid the robot.

Look @elonmusk at a Tesla Model S hitting and killing a guiltless robot in Vegas. Your car was under a full self-driving mode. @bheater, @jjvincent, @ingridlunden, @andyjayhawk Check this out!https://t.co/0q605Fdknb

Promobot revealed the accident in a tweet on Monday: “Look @elonmusk at a Tesla Model S hitting and killing a guiltless robot in Vegas,” the account wrote. “Your car was under a full self-driving mode.”

In what is considered by some online to be a publicity stunt, a small Promobot robot can be seen to the side of the roadway in an attached video moments before a sleek white Tesla cruises up the road. The vehicle bumps the robot as it passes, sending it crashing to the ground. It seems like the vehicle’s advanced sensors missed the robot because it was stationary. An early August crash—in which a Tesla vehicle with “autopilot” turned on crashed into a stopped firetruck in California—demonstrated the shortcomings of the technology.

The sensors on Teslas equipped with self-driving technology do not alert the driver—who is supposed to remain aware at all times—to stationary obstacles. According to Wired, this is to avoid constant unnecessary alerts about “obstacles” like roadsigns, trashcans, and loose hubcaps. Instead, the human behind the wheel must remain alert even when using self-driving sensors.

Promobot told Daily Mail that the incident occurred around 7pm local time. The company was moving the robots when one veered from its intended path and ended up along the roadway, where it was struck.

Twitter users are theorizing that the entire incident was a publicity stunt, pointing in particular to the idea that a robot was “killed.”

“You cannot kill a robot… it’s not a living being,” one user wrote. Several other users agreed. @jqontech wrote “If you hear about a story about a “self-driving” #Tesla hitting a #robot in #LasVegas (#CES2019) just remember, there is no such thing as a “self-driving” Tesla. A gentle reminder… and make of the video what you will (like, who is shooting the video?)”

The video was posted to YouTube by an IT specialist named Kevin Jenkinson. In an interview with the Daily Dot, Jenkinson said the video was taken from an outdoor camera of a security system. According to Jenkinson, the robot was on the road for around five minutes before the Tesla vehicle came along.

Not news, you're correct. It's among the stranger of the press releases I've gotten today.

Kivokurtsev told the Dot that the damage to the robot may be irreparable. “Parts of the body, the mechanisms of the arms, the movement platform and a head are destroyed,” he said. “Now the robot is not able to take part in the exhibition and most likely there is no way to restore it.”

Promobot does not intend to pursue reparations, according to Kivokurtsev. A Tesla spokesperson declined to comment.