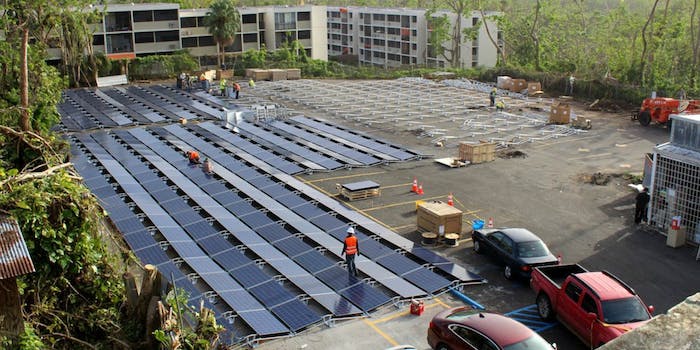 The electric automaker claims this will be the first of many.

Elon Musk said he would delay the unveiling of his Tesla Semi to focus on bringing his energy-storage solution to hurricane-ravaged Puerto Rico. On Tuesday the Tesla Twitter account gave us a look at its first solar energy project on the island.

The account posted several images of an energy solution it built to power Hospital del Niño, a children’s hospital in San Juan. The photos show a large solar panel field in what appears to be the parking lot of the building while another image shows cranes hoisting several energy-storage Powerpacks, a commercial version of the company’s sleeker Powerwall.

Hospital del Niño is first of many solar+storage projects going live. Grateful to support the recovery of Puerto Rico with @ricardorossello pic.twitter.com/JfAu11UBYg

The two components will work together to provide stable, long-lasting energy to the country after Hurricane Maria knocked out the island’s power grid. On Oct. 6—two weeks after the storm hit—only 9 percent of residents had access to power. The solar panels will gain energy from the sun and transfer it to the large battery packs, which Tesla claims can hold a charge for longer than a week.

“The Tesla team has done this for many smaller islands around the world, but there is no scalability limit so it can be done for Puerto Rico too,” Musk wrote on Twitter. “Such a decision would be in the hands of the Puerto Rico government, PUC (Public Utilities Commission), any commercial stakeholders and, most importantly, the people of Puerto Rico.”

Tesla said the solar storage project is the first of many that will go live in Puerto Rico.