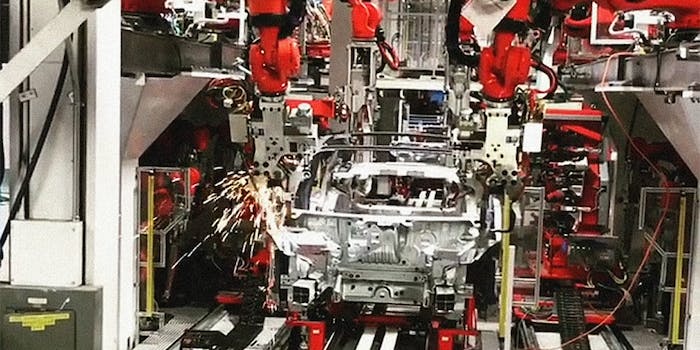 So this is what Musk meant by 'production hell.'

Elon Musk wants you to know that Tesla Model 3 production is underway despite reported “bottlenecks.”

The business magnate posted a video on Instagram showing welding robots poking away at the frame of his midsized sedan as it sits on the assembly line.

I know what you’re thinking, “no wonder they’re behind schedule.” Don’t worry, Musk clarified that the robots in this clip were slowed down to one-tenth of their normal operating speed. This was done so Tesla could produce safeguards in case of a malfunction. Unsurprisingly, there are no human workers anywhere in the clip.

In July, Musk said he was preparing for six months of “production hell” in order to meet ambitious manufacturing goals. The CEO wants to produce 5,000 units per week by the end of this year and 500,000 annually by the end of 2018.

But the automaker failed to meet its production goals last quarter and was forced to delay the unveiling of its electric semi-truck to focus on the Model 3. Recode reported in August that 63,000 people canceled their preorders for the Model 3, dropping the total number down from 518,000 to 455,000. Most people who stick it out won’t receive the keys to their car until the end of 2018 at the earliest.