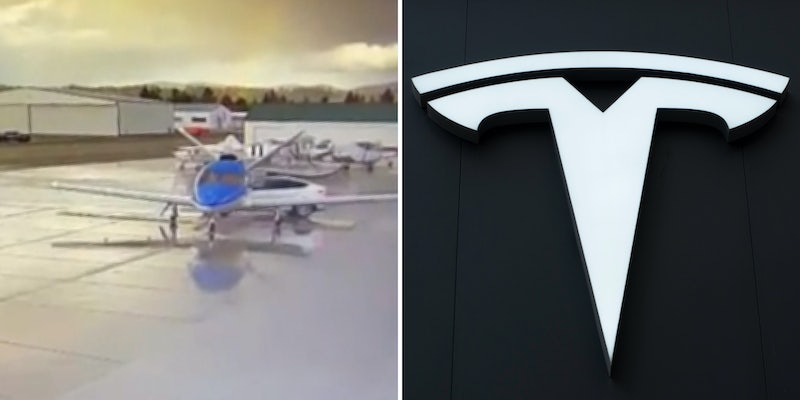 Neither Tesla or the aircraft manufacturer have commented on the crash.

A video posted to Reddit this week appears to show a Tesla vehicle driving into a jet while using one of its self-driving functions.

Uploaded on Thursday by u/smiteme, the footage, reportedly taken at an event held by the aircraft manufacturer Cirrus, shows the vehicle running into what’s known as a Vision Jet.

The vehicle is said to have struck the aircraft, reportedly valued at around $3.5 million, after the owner activated Tesla’s Smart Summon feature. The Vision Jet can be seen rotating as the Tesla attempts to drive through it.

The Reddit user who allegedly filmed the incident expressed shock at “the poor soul” responsible for the accident.

“I was at an event for the aircraft manufacturer Cirrus,” the redditor wrote. “I also drive a Tesla Model Y – but was not the poor soul (with poor decision making abilities) who summoned his Tesla around several expensive aircraft – only to crash it into the most expensive one ($3,500,000)! Woof.”

The Daily Dot reached out to the redditor who shared the footage but did not hear back by press time.

The incident would not be the first involving Tesla’s Smart Summon function, which allows the vehicle to use its self-driving technology to leave a parking spot and drive around obstacles until it reaches its owner.

As noted by the Verge, numerous Tesla owners reported both close-calls and fender-benders after the feature was introduced in 2019.

Tesla did not respond to the Daily Dot’s inquiry regarding the most recent incident involving the Vision Jet.

The video also made its way over to Twitter where both supporters and critics of Tesla weighed in.

The Daily Dot also reached out to Cirrus to ask for details on the incident. While the company did not elaborate on the accident, in a statement, Cirrus confirmed that the aircraft struck by the Tesla was in fact the company’s Vision Jet.