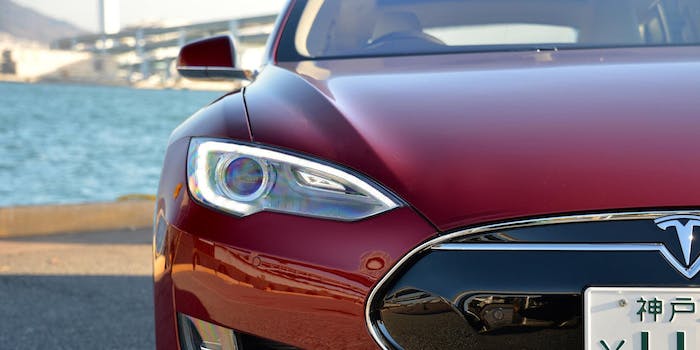 The tech and the driver both didn't notice the trailer.

The first death in a vehicle collision that occurred while using Tesla’s autonomous driving function has prompted an investigation by federal highway and safety regulators. Joshua D. Brown, 40, was killed in Williston, Florida in a May 7 crash, the Associated Press reports.

Tesla’s Autopilot function lets the car drive itself, and while it’s still necessary for drivers to be engaged with their vehicles and the road around them, the feature allows the car to automatically stay in lanes, switch lanes, detect safety hazards, and apply brakes when necessary.

The fatal accident was caused when both Brown and the Autopilot feature on his Model S neglected to notice the white side of a commercial tractor trailer against a bright sky; the trailer was turning perpendicular in front of the vehicle, Tesla said. The Model S drove under the trailer, with the bottom of the trailer shearing the roof off the Tesla.

The company reported the incident to the National Highway Traffic Safety Administration, which has opened a preliminary investigation into the incident. It aims to find out whether Tesla’s Autopilot feature worked as expected. Tesla already shares its Autopilot data with the Department of Transportation to help create regulations regarding autonomous vehicles.

The driver of the trailer said the Tesla driver was “playing Harry Potter on the TV screen,” though he could only hear, not see, the movie, according to the Associated Press. Tesla told the publication the dashboard screen does not play videos.

On his YouTube channel, Brown frequently posted videos of his Tesla (which he named “Tessy,”), and his most recent video documented Tesla’s Autopilot feature successfully avoiding a collision. In the video description, Brown says he’s listening to an audiobook; it’s unclear if an audiobook may account for the Harry Potter story the trailer driver heard.

In its blog post titled “A Tragic Loss,” Tesla reiterated the importance of maintaining human control of vehicles.

We do this to ensure that every time the feature is used, it is used as safely as possible. As more real-world miles accumulate and the software logic accounts for increasingly rare events, the probability of injury will keep decreasing. Autopilot is getting better all the time, but it is not perfect and still requires the driver to remain alert. Nonetheless, when used in conjunction with driver oversight, the data is unequivocal that Autopilot reduces driver workload and results in a statistically significant improvement in safety when compared to purely manual driving.

While Autopilot can steer and brake on behalf of humans, it still requires drivers to keep their hands on the wheel, and can detect when someone is not engaged with the vehicle. If the car realizes a person is not holding on to the wheel, it audibly reminds them to do so, and if there is a continuous lack of physical control, the Tesla will slowly drop speed until hands are detected.

Self-driving technology promises to one day let humans go entirely hands-free, but development is nowhere near the “sit back and relax” future we’ve been promised in film and moonshot concepts. As autonomous capabilities and our comfort with computer-controlled driving increases, experts expect that behaviors that distract us from the road will increase too, and that could be unsafe while the technology still relies on human behavior.

In a statement, Brown’s family said it “hopes that information learned from this tragedy will trigger further innovation which enhances the safety of everyone on the roadways.”