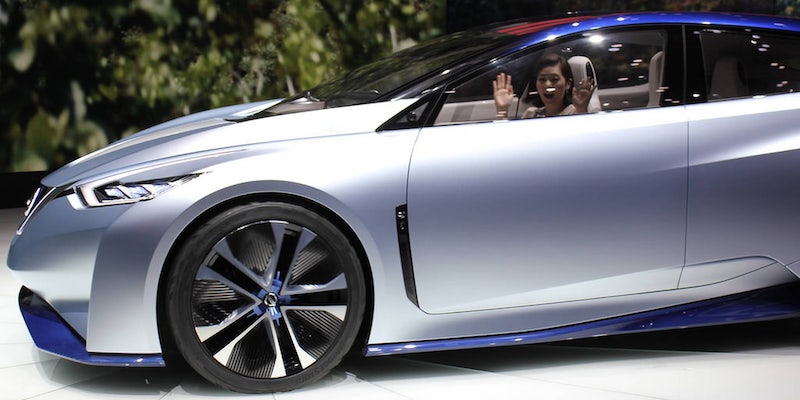 Autonomous cars may lead to more sex while driving.

When cars make it possible to go hands-free, experts say we might be going more hands-on. Self-driving vehicles will eventually hit the streets in droves, and many cars now on the road have semi-autonomous functionality. Letting cars drive themselves frees up drivers to do other things—like eat breakfast, put on mascara, and yes, even have sex.

Already drivers are exploiting self-driving car features. In October, three men drove a Tesla Model S P85D from California to New York in just 57 hours and 48 minutes, with Tesla’s autopilot feature on for 96 percent of the drive. And one driver filmed his Tesla driving on autopilot from the back seat of the vehicle.

As self-driving cars become more popular and features like autopilot are implemented, behaviors people engage in that are potentially unsafe or distracting will increase because of their comfort level with the technology.

“It’s human nature,” Kirk said in an interview. “Once people get really comfortable with the technology and you’ve got two people in close proximity to each other, and one is supposed to be watching what’s happening and being ready to take over the driving if required, but if these people engage in sex, which will happen more than it does now … that does compromise the person’s ability to take over if there’s an emergency and the computer says to take over.”

But these distractions can prove dangerous, especially during what Kirk refers to as “phase one” of autonomous vehicle development, when human drivers are still required.

Tesla’s autopilot safety features note there should be a human being behind the wheel at all times to take over in case something goes wrong, and Volvo’s semi-autonomous vehicles augment the driving experience, adding automated driving features that still require a driver to control.

Distracted driving is an issue autonomous vehicles hope to solve. According to Volvo’s chief executive Håkan Samuelsson, driverless cars will decrease car accidents by 80 percent by 2035. Currently, one in four accidents are caused by people using mobile devices, including teens who take selfies with Snapchat’s speed filter.

“Having sex in a driverless vehicle seems like a pretty wacky concern, but it’s actually good foresight by Barrie Kirk. After all, much of the reason car companies and governments are so hopeful about driverless cars is because distracted driving has made car travel so dangerous in the first place,” Paul Mackie, communications director at the transportation research organization Mobility Lab, said in an email. “Once driverless cars are fully on the roads, there is no doubt many, many lives will be saved. And if that means more texting, sleeping, and having sex in those vehicles as they move down the highway, well, we as a society will be much better for it.”

Increased sex in cars seems like a quirky outcome of the rise of autonomous vehicles, though fans of the 1996 movie Crash may have totally seen this coming. It’s just one more activity we’ll be able to engage in while computers pay attention to the road.

Personally, I was skeptical of Kirk’s initial claims, so I decided to run my own informal poll. Eighty-one percent of respondents to my Twitter poll said they would have sex while riding in a driverless car.

Would you have sex while riding in a driverless car?

We can’t rely on computers to drive us around yet, so until vehicles are fully-autonomous and don’t come with a disclaimer that human drivers are still needed, sex, and any other activity, can be dangerous to engage in. Ultimately, though, such activities will be commonplace, and Kirk even predicts retailers will begin selling “car curtains” to hide what’s going on in the back seat.

“These cars will have enough artificial intelligence to deal with any and every eventuality,” Kirk said. “In fact, some of the concept cars are already out there have the front seats turned around so occupants can face each other. You can talk, have a meal, or you can have sex. Those cars are being designed with a whole different lifestyle inside the vehicle.”

For now, don’t bang in your Tesla while it’s on autopilot, as your steering wheel still needs your full attention. But soon, it may be totally chill to partake in lascivious commuting, once our cars have full control of every possible action.