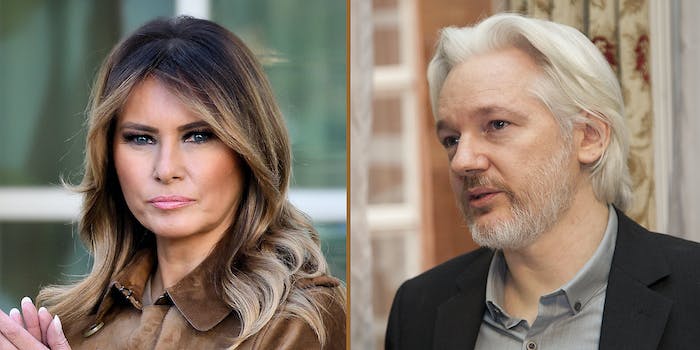 Meticore is a weight-loss supplement.

Telegram channels posing as prominent right-wing figures are hawking a supplement that supposedly prevents COVID-19. Some of the channels even claim that the supplement, Meticore, “will kill every infection.”

“Only 6 bottles to better health and protection from the famous COVID-19!” reads one.

The channels making the claims about Meticore claim to be Melania Trump, Julian Assange, Mel Gibson, Steve Bannon, Sen. Rand Paul (R-Ky.), Michael Jackson, and others. Some channels target particular interests, including the [Ghislaine] Maxwell Trial Tracker, Drain the Swamp, and the Storm is Here—an apparent reference to the QAnon conspiracy theory. Most of the channels have tens of thousands of subscribers or more.

None of the channels are verified and appear to be fraudulent. Many, though not all, have been labeled a “scam” or “fake” by Telegram. One that isn’t labeled a scam or fake, that of actor Mel Gibson, has nearly 130,000 subscribers. A representative for Gibson previously confirmed to the Daily Dot that the actor is not active on Telegram.

Meticore is mostly marketed as a weight loss supplement. The website that the Daily Dot found all the Telegram channels link to claims that low core body temperature is a root cause of low metabolism and, thus, weight gain. Meticore, it says, uses a “proprietary blend” of plants and nutrients to “target low body core temperature” to “TRIGGER and supercharge metabolism.”

The website doesn’t reference COVID or claim that Meticore cures infection or other diseases. The vast majority of online content about Meticore exclusively claims that it stimulates weight loss.

Protection from COVID appears to be a new twist.

Much of what’s written about Meticore online is positive—with one notable exception. The reviews on its Better Business Bureau profile are overwhelmingly negative. Many allege it’s a “scam” and that the company doesn’t live up to its promises. They also say that it charged them more than it was supposed to and refused to honor its money-back guarantee.

“I have gained 10 lbs weight in the almost three months I have been taking this product,” wrote one. “I don’t blame them. I blame me for falling for the scam.”

Meticore’s customer review rating on the Better Business Bureau is 1.04 out of five stars.

Previously the Telegram channels touted Meticore’s supposed weight loss capabilities. Only recently have they began pushing the claim that it prevents COVID and cures infection. The same channels have marketed Trump-branded coins in the past.

It’s not clear to what extent, if any, Meticore is involved with the Telegram channels.

It’s also unknown whether any of the right-wing figures have approved the use of their names and likenesses to sell Meticore. Representatives for former President Trump, Melania Trump, and Mike Pompeo, whose before and after photos are used to promote the alleged benefits of Meticore, did not respond to request for comment Monday afternoon. None of the aforementioned individuals are known to have official accounts on Telegram.

It’s also not clear if this is a network controlled by a single individual, if each channel is controlled by a separate person or entity, or a combination. But it seems likely that some or all of the Telegram channels are working together, particularly as posts from different channels use identical imagery and/or language.

“Tucker Carlson has published the great news that METICORE is the cure for every ‘modern’ disease and it is a great protection from Covid-19,” says one on a channel that supposedly belongs to Carolyn Bessette-Kennedy.

An identical post was made by the Steve Bannon Official channel. Both posts were made within a few hours on Monday.

Many of the Telegram posts about Meticore include photoshopped images from Tucker Carlson’s show, press conferences, and photos supposedly taken before and after using Meticore. Some use actual footage, such as one from when Trump addressed the nation after recovering from COVID, but misconstrue the footage as referring to Meticore.

Some of the writing in the Telegram posts suggests that the writer may be less familiar with English, or that the captions were originally written in a different language and automatically translated. “Covid-19 attacks the people that are with bigger weight,” reads a caption that appears on several of the posts.

Many use references likely to appeal to Trump supporters. Some claim that President Joe Biden is going to ban Meticore. Many say that 2 million units were sold in a matter of days. Numerous posts use the age-old tactic of claiming that supplies are running out.

The URLs included therein are Bitly addresses that include phrases like “Trump cure” and “Melania weight loss.”

The Daily Dot also reached out to the Food and Drug Administration (FDA) on Monday but did not receive a reply.

It is unknown how much revenue the Telegram accounts have accrued since they first began promoting Meticore.

Update 11:22am CT: Meticore told the Daily Dot via email that it runs a commission-based affiliate program. “Unfortunately, with over 50,000 affiliates selling our popular product some do slip through the cracks with unethical marketing,” Meticore said. It also said its “affiliate abuse team” would investigate the false pages.