Those damn kids and their fancy smartphones.

The high school class of 2015 has many challenges facing it as it disperses toward college classes: the rising costs of tuition, a challenging job market. But the true struggle for these teens is more immediate: trying not to go over their monthly allotment of data.

In a survey of 10,000 high school graduates conducted by Niche.com, teens revealed their usage habits when it comes to mobiles devices. As one may expect, teens really love to rack up the data. Over 60 percent of all those surveyed use Snapchat, Facebook, and Instagram on a daily basis, marking a big win for Facebook and the photo-centric social network it owns. 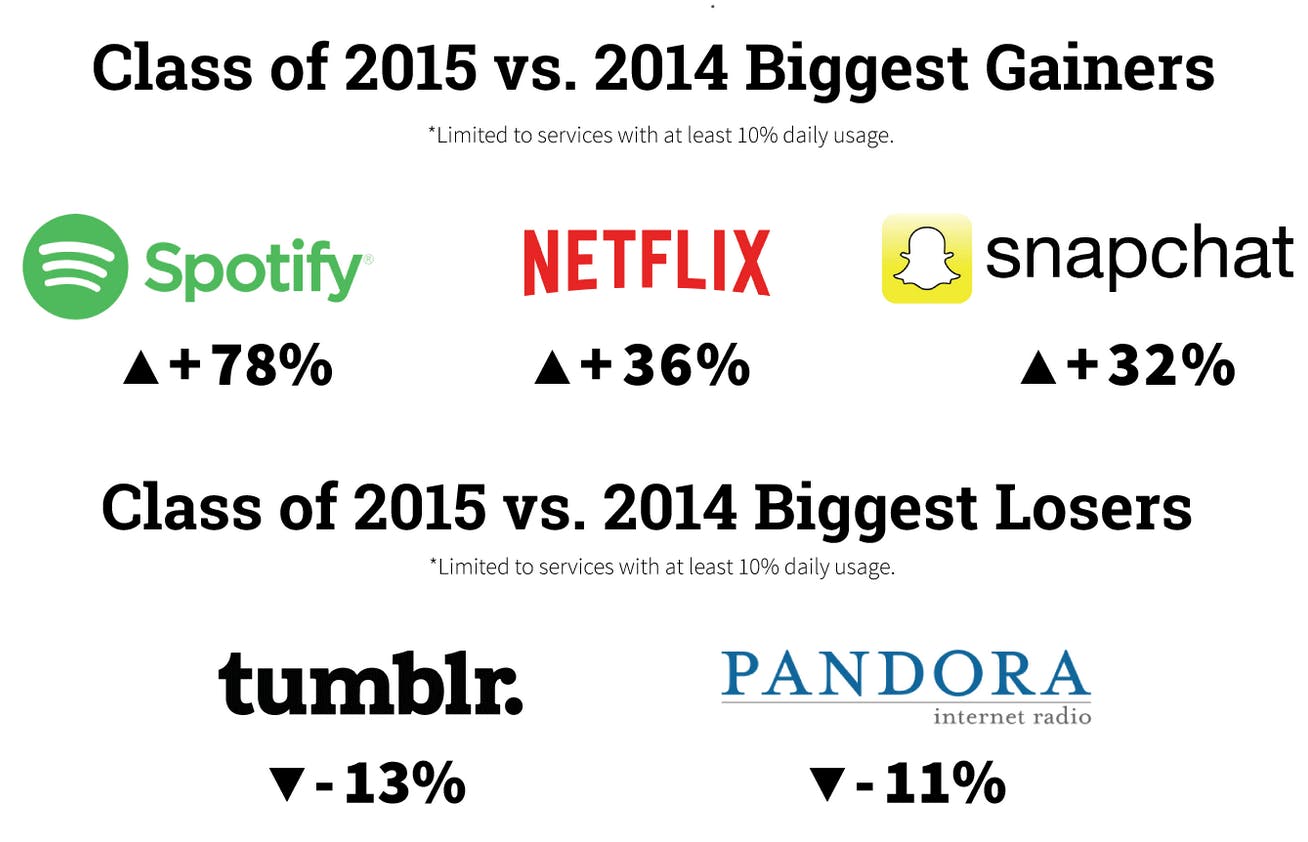 Snapchat experienced one of the biggest gains in usage in comparison to the class of 2014, with a 32 percent increase in daily usage. It was joined by the biggest names in streaming as the primary gainers. Netflix netted an increase of 36 percent, while Spotify proved to be the biggest winner, experiencing a 78 percent jump in use from the previous graduating class.

The biggest gain overall belonged to Yik Yak, the anonymous app that has specifically been banned from high school campuses around the country. It grew a whopping 383 percent, but the number is inflated because the app just wasn’t that popular in 2014. Only 11 percent of the class of 2015 use the app.

In general, streaming succeeded in hooking the teens of 2015, with Rdio, Amazon Prime, Hulu, and Vimeo all experiencing upticks in usage. YouTube had a slight drop off of two precent, but Pandora took the biggest hit at nearly 11 percent. With Apple Music‘s upcoming free radio service Beats 1 and Google Play Music’s Pandora-style radio stations now available, Pandora will likely continue to feel the squeeze as it competes for the years of younger listeners in a crowded market. Still, things aren’t all bad for Pandora; it’s the most popular streaming app by daily usage and more kids use the app on occasion than any of its competitors.

On the social network front, Facebook barely saw any changes because everyone is already on the site. (Upon being born, children are provided a birth certificate and a Facebook login.) Tumblr took a fall, losing 13 percent of its daily use. Twitter found slight gains at five percent, but the real winner was Pinterest, which managed to jump 23 percent, a growth that bodes well for the future of the bookmarking service as it adds the ability to buy straight from in app, a feature primed to appeal to tap-happy teens with their parents’ credit card linked to their account. Then again, LinkedIn had big gains so maybe these kids already have their own money and are in the corporate hierarchy or making connections to secure funding for their startup.

Communication is one of the biggest points of engagement for the class of 2015. 85 percent still use standard texts and SMS, though that number is down slightly from the year prior. That’s likely thanks in part to the prominence of Facebook Messenger—which jumped nearly 10 percent and is used with some regularity by 70 percent of those surveyed—and more modest gains for Kik and WhatsApp. Snapchat’s high usage likely also plays a role, though it’s clear texting isn’t going anywhere.

Interestingly, almost none of the teens surveyed use dating apps—or at least admit to using dating apps. Likely they have no need for them in high school, being confided into a building of their peers all day, it’s easier to connect with a potential romantic interest. Wait for them to get a couple years into college, watch some friends get married young, and see that number of dating app users skyrocket.