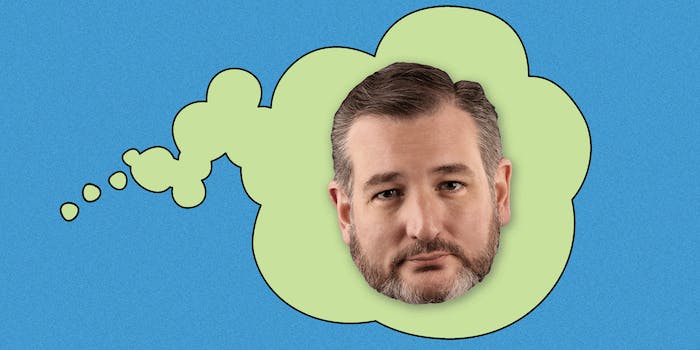 'Your name is Reek.'

Sen. Ted Cruz (R-Texas) attempted to walk back his comments calling the Capitol riot a “terrorist attack.” Now he’s being thoroughly thrashed on social media. People are calling him “spineless,” a “coward” and much worse.

Speaking in Congress earlier this week, Cruz said “we are approaching a solemn anniversary this week.”

“And it is an anniversary of a violent terrorist attack on the Capitol,” he added.

His comments earned the ire of those who falsely believe the Capitol riot was a peaceful protest. Tucker Carlson was among those who raked him over the coals.

On Thursday, Cruz went on Carlson’s show to apologize. As they spoke, the chyron below them read, “Cruz’ing for a bruising/What on earth was Ted Cruz thinking?”

“The way I phrased things yesterday it was sloppy, and it was frankly dumb,” Cruz began.

Carlson interrupted him to say that he didn’t believe him, and Cruz insisted people misunderstood him.

“What I was referring to are the limited number of people who engaged in violent attacks against police officers,” the Texas senator said, adding: “…I wasn’t saying that the thousands of peaceful protesters supporting President Trump are somehow terrorists.”

Carlson still wasn’t buying it. He accused Cruz of adopting liberal rhetoric about the Capitol riot. Carlson’s among those who’s spent the last year trying to reframe condemnation of participants in the failed insurrection as vilification of all conservatives.

“It was a mistake to say that yesterday,” Cruz insisted.

No one is buying it.

Representatives on both sides of the aisle joined in the attacks on Cruz.

Rep. Adam Kinzinger (R-Ill.) tweeted: “Wow @tedcruz that is one of the most pathetic things I have ever seen.”

As CNN reporter Daniel Dale pointed out, Cruz has referred to the Capitol riot as a terror attack in multiple press releases.

Cruz has also tweeted the same. Just after the riot, he tweeted: “Yesterday’s terrorist attack was a horrific assault on our democracy. Every terrorist needs to be fully prosecuted.”

It didn’t take long for people to unearth the tweet.

“Ted Cruz has been calling January 6th a ‘terrorist attack’ for an entire year until yesterday when Tucker Carlson told him not to,” @patriottakes quote tweeted Cruz Friday morning.

On Friday morning, CNN’s John Berman dubbed Cruz “Reek,” the name Theon Greyjoy’s torturer on Game of Thrones gave him after castrating him and refusing to let him bathe for months.

“A senator apologizing to a propagandist. Wow. #Reek,” tweeted one.

While many laughed, some didn’t think the comparison to Reek was apt.