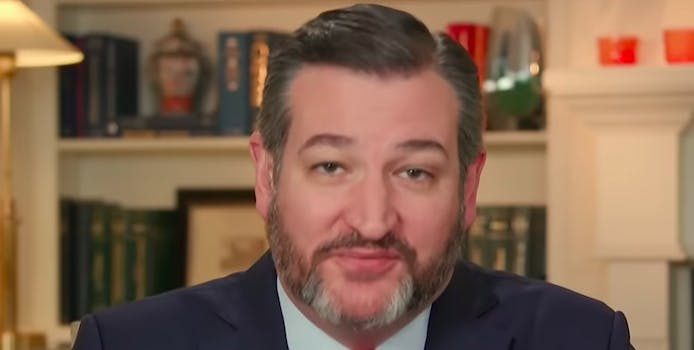 Sen. Ted Cruz (R-Texas) tweeted on Saturday about the ongoing scandal surrounding Virginia Gov. Ralph Northam, who is facing calls to step down after a photo from his page on his medical school yearbook surfaced of people in a KKK robe and blackface. But while Cruz is criticizing Northam, he can’t escape his ties to Rep. Steve King (R-Iowa).

“Media fixation w/ blackface (‘was he dressed as Michael Jackson?’) obscures the more damning point:  anybody who voluntarily chooses to celebrate the evil & bigoted KKK is unfit for public office. Media should be asking: did you select that picture to represent what you believe?” Cruz asked on Saturday.

Media fixation w/ blackface (“was he dressed as Michael Jackson?”) obscures the more damning point: anybody who voluntarily chooses to celebrate the evil & bigoted KKK is unfit for public office. Media should be asking: did you select that picture to represent what you believe?

But on Monday, Crooked Media editor Brian Beutler pointed out an inconvenient fact.

King did helm Cruz’s ill-fated run for president in 2016. And people wanted him to know they knew.

Us Democrats agree. Now where's your post on Steve King?

Ted Cruz is the Steve King of weighing in on racism.

King, from Iowa’s 4th Congressional district, has a long history of making racist statements, including calling immigrants dirt, and not knowing why white supremacy is bad. He also met with neo-Nazis in Austria.

By the time King was brought on to Cruz’s campaign, he had already made a number of racist statements and attempted to declare English the official language of the U.S. In 2012, in a panel at the Conservative Political Action Conference, he called multiculturalism, “a tool for the left to subdivide a culture and civilization into our own little ethnic enclaves and pit us against each other.”

While Cruz decried King’s most recent foray into white supremacy on NBC’s Meet the Press, he didn’t say that he wouldn’t support King in the future.

Instead, when asked, he dodged the question, saying,  “What I’m going to do is urge everyone to stand for principles that matter,” Cruz said. “When it comes to speaking out against bigotry—whether it is the Klan or Nazis or anything else—I have a lifetime of standing up to that bigotry and I’ll continue it.”

When reached for comment, a spokesperson for Cruz reiterated his statement about King on Meet the Press.